The Fannin Co. Rebels wrestling squad had eight wrestlers qualify for the sectional tournament and two bring home the title at the Area 5-3A tournament Saturday, Feb. 1, at The Lovett School in Atlanta. 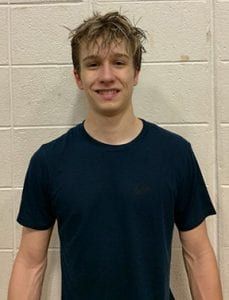 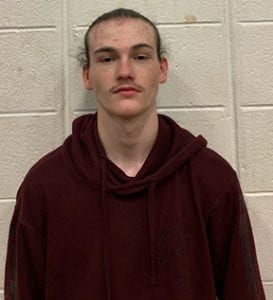 At 106 pounds, No. 2 seed Kainan Henson brought home the area wrestling championship. Henson defeated Lovett’s Alex Hyman by pin at 1:56 in the semifinals before taking down top-seeded Dawson Thompson from North Hall by a score of 11-3 in the finals.

At 126 pounds, No. 2 seed Landon Galloway won the area championship. Galloway defeated William Cummings from Pace Academy by pin at 2:24 in the quarterfinals, third-seeded Ethan Powell by pin at 2:31 in the semifinals, and No. 1 seed Jeremiah Allen of Lovett in the finals by pin at 4:50.

Third-seeded Grayson Patterson placed second at 120 pounds after defeating sixth-seeded Ben Schiffer by a score of 9-3 in the quarterfinals and Greater Atlanta Christian School’s Nalm Moss, the No. 2 seed, 4-1 in the semifinals. Patterson fell to top-seeded Jacob Pedraza from North Hall by pin in 48 seconds in the finals.

Wrestling at 145 pounds, Corbin Davenport placed second as the No. 6 seed. He defeated Trevor Coryell from Lumpkin Co. by pin at 1:40 in the quarterfinals before defeating Matthew Cha of Westminster by pin at 5:54 in the semifinals. He fell to No. 1 seed Cody Smith in the finals by pin at 2:53. 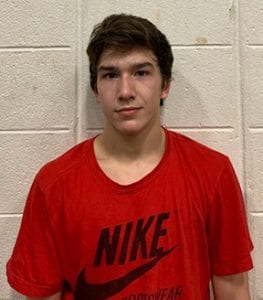 Grayson Patterson placed second at 120 pounds in the Area 5-3A tournament Saturday, Feb. 1. 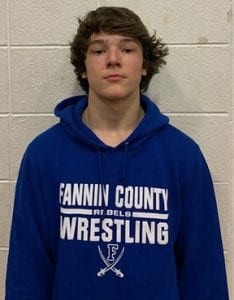 Corbin Davenport placed second at 145 pounds in the Area 5-3A tournament Saturday, Feb. 1.

McCay Turner placed second at 152 pounds as the top seed. Turner defeated Mason Bruning of Greater Atlanta Christian by pin in 52 seconds in the semifinals before falling to Dalton Battle from North Hall in the finals by a score of 6-1.

At 138 pounds, Carson Collis placed fourth as the No. 5 seed. Levi Patton placed fourth at 195 pounds as the fourth seed. Patton defeated Tom Bethea of Lovett by a 12-3 decision in the quarterfinals.

At 220 pounds, Austin Smith placed fourth as the No. 5 seed after defeating Nile Bennett from Pace Academy by pin at 3:49 in the quarterfinals.

Fannin Co. finished third as a team in points with 163 points. North Hall was first (278) and The Lovett School second (170). The top four finishers in each weight class will move on to wrestle in the sectional tournament next week at South Forsyth High.