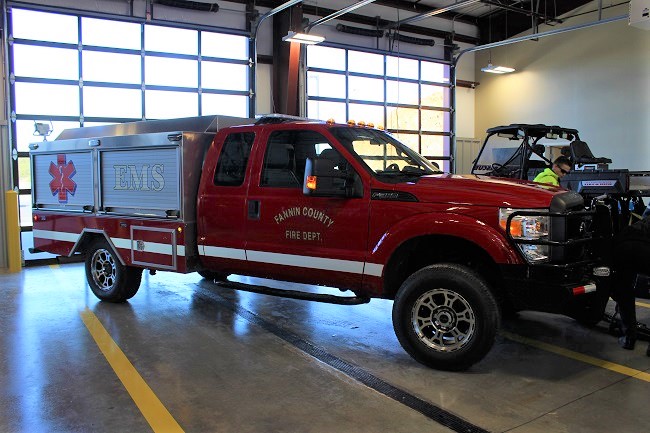 Fannin County recently moved up to a six from a five on the ISO fire insurance rating, which caused many in the county to worry about their insurance increasing.

The last ISO evaluation occurred in 2012, and since then, significant protocol changes were put into place concerning scoring.

Thomas’s three-fold plan consists of flow tests, personnel, and fire planning to get the score back down by the July 2020 reevaluation.

“There are now more requirements for personnel, training, and response to fire calls,” said Thomas.

The current increased rate won’t go into effect until November 2019.

According to Thomas, ISO requires three volunteers to one paid personnel on the scene of a fire. Due to that ratio, if the county dispatched out three stations, Fannin would need to have between 60 to 80 firefighters on staff. This rule changed in 2014.

However, if Fannin dispatches out from one fire station and used the engines and tankers from other stations, then the personnel numbers change.

The infrastructure of the county also changed since the last evaluation, which needs pre-fire planning. However, the fire department hasn’t had the time to dedicate to that task.

Currently, the paid EMS employees are trained firefighters, but medicals have increased to almost 500 a month, and their first responsibility is to that service. Volunteers also have less time to dedicate to firefighting due to job commitments.

Yearly hydrant and flow testing will be instituted to check for pressure and flow rates. Thomas confirmed he spoke with Mayor England and Mayor Seabolt in person and Mayor Whitener on the telephone to discuss the plans.

“It’s going to take us helping too as far as the way ISO wants these water studies done as far as the pressure testing, flow testing, and so forth,” commented Thomas.

Post Two Glenn Patterson inquired, “How hard do you think it will be [to get the score back down]?”

“My plan is to have it set early next year, so by July we can have a reevaluation,” stated Thomas. 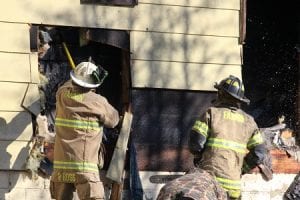 Image from a past fire in Blue Ridge.

Thomas downplayed the idea of a 10 percent increase in insurance rates. He spoke to several insurance representatives and one expressed the opinion that the difference in a five and a six rating isn’t huge.

For homes to receive even lower ratings, they need to be within five miles of station and access to pressurized water.

Chairman Stan Helton asked, “How long will it take for them to change the classification?”

Thomas didn’t have an exact date or timeframe but assumed it would go “a whole lot quicker” since they would only be reevaluating two years of data.

“How soon would we have to hire these firefighters?” questioned Patterson.
The fire department’s budgeted to hire two on each shift for a total of six new firefighters.

“Lack of firefighters because five or six years ago, we had 25 firefighters show up at the scene and the numbers were good, but maybe two of those were full time,” commented Thomas.

Thomas also confirmed that he would ask his contact Michael Stokes about hiring two additional firefighters to see if it will even make a difference.

Post One Earl Johnson stated, “I don’t care about 10, 20, 30 years ago, I’m talking about learning that our ISO rating went up in the newspaper. If this was a problem in 2018, I think it should have been brought up somewhere in a meeting between now and then. We’re facing this, and we’re going to have to look at this in budgeting.”

Johnson even suggested he might have hesitated on rolling back the millage rate as much if he had known about this earlier.

Thomas knew the results of the ISO evaluation on August 14 and stated the personnel requirement changes were announced through the website only.

The ISO representative didn’t want to see the new equipment or stay the traditional five days for his report. He only reviewed paperwork and stayed around four hours.

“I don’t understand anything about it, but the county has spent oodles of money, and I am not saying it negatively, but we’ve spent a lot of money in seven years for this to pop up,” commented Johnson, “I don’t like knowing afterward at all. I promise you from here on out it’s going to be one of my concerns.”

Helton proposed a monthly or bimonthly update to keep the commissioners involved the progress on lowering the rating.

Counties around Fannin fall within the four to seven ISO rating.