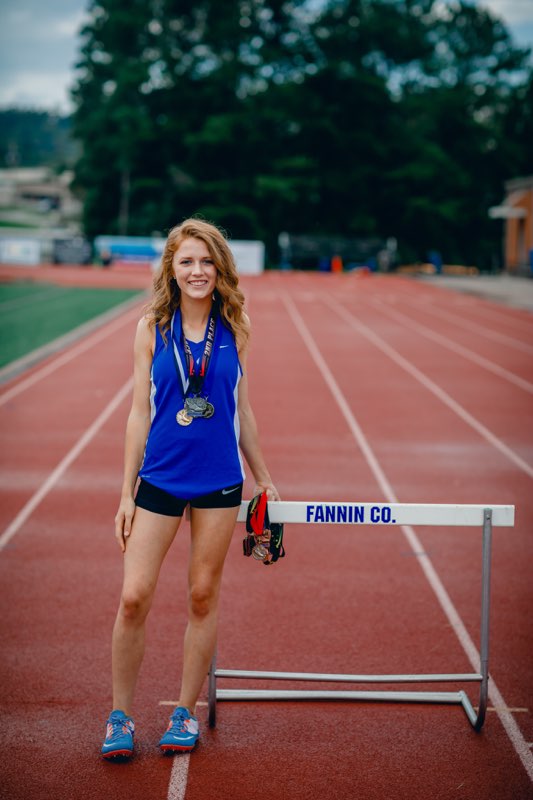 Although there was never an official signing ceremony, Macy Galloway committed to the University of North Georgia for track and field this past April. Galloway is a recent graduate of Fannin County High School who excelled at everything she did.

The graduate was a dual athlete who participated in Fannin County High School Softball and Track and Field for four years and earned a varsity letter each one. If this doesn’t seem like enough for a high school student to handle, Macy managed to take two AP courses, six dual enrollment courses, be part of three clubs, and juggle a job throughout it all.

The clubs Galloway participated in were Fellowship of Christian Athletes (FCA), National Honors Society, and National Technical Honors Society. Macy was an outstanding student who had a 4.0 GPA, was always on principal’s list, graduated with honors, and was ranked twelfth in her class.

The scholar not only excelled in the classroom, but also on the field. In her time playing softball for the high school, she earned the title of 2016 and 2017 offensive player of the year, was given the scholar athlete award three years in a row, and was given the title of first team all region shortstop three years in a row as well. Even after the sport ended in the Fall, she carried her successes over to the Spring for track and field. Over the four years of her high school track career, Galloway qualified for sectionals each one. She took it a step further her Sophomore and Senior year when she qualified for state.

When asking track Coach Travis Earls about the athlete, he stated, “Throughout my 26 years of coaching football and track, I have coached athletes of all ages and abilities. It takes a very special athlete to compete in track and field. In other sports, running laps is typically administered as punishment for subpar performance or lack of effort. Whereas in track, running is how an athlete hones their craft and pushes themselves in order to improve. Rarely, have I coached an athlete who displays the unwavering commitment to track and field and who embraces the challenge to consistently improve as Macy Galloway has throughout her four years at Fannin County High School.  Not only is Macy a standout on the track, but also an outstanding student who has excelled academically at Fannin County Comprehensive High School.

Most importantly, Macy is a remarkable individual who displays the qualities of selflessness, integrity, compassion, intellect, and thoughtfulness we want in our next generation of leaders. Her true nature is revealed in every endeavor she undertakes and her thoughtfulness touches everyone who meets her. Macy perseveres through adversity with a gritty determination to succeed; that is rare in an individual of Macy’s age. This dedication to success is the fuel that drives and motivates Macy. I have no doubt that Macy will elevate the collective greatness of The University of North Georgia’s student body and become a meaningful contributor to the success of the University’s track and field program.”

“I would like to thank Coach Travis Earls for coaching and mentoring me throughout my high school track career. Without his knowledge, dedication and passion, I would not be the athlete I am today. I would also like to specifically thank Coach Mark Stone and Coach David Dyer for coaching me throughout high school. I would like to thank my parents for everything they have done to help me achieve the goals I have set in my athletic career. I would also like to thank everyone else who has coached me, trained with me, or cheered for me along the way.  I am forever grateful for all of the support that has gotten me to where I am today,” Macy shared with the Fetch Your News (FYN) Sports Team.

Congratulations to Macy and good luck in all of your future endeavors!