Blue Ridge, Ga – 2019 football season will begin with new LED lights shining on the field, and the system will give students a chance to create a unique light show.

38 football stadium lights have burnt out, and many need new ballasts or entirely new fixtures to properly work.
Four bids came in, and the lowest bid from Over and Under General Contractors was for $242,490.00.
Previously, Phillips estimated around $400,000 to $500,000 for updating the lights before the project went out to bid.

Danner explained, “The old light fixtures, the old cages will be coming down. New fixtures will be going up. It won’t be 88 fixtures anymore because LEDs are brighter, so it will be fewer fixtures, guaranteed for 10 years. Anything goes wrong, they come out and take care of it.” 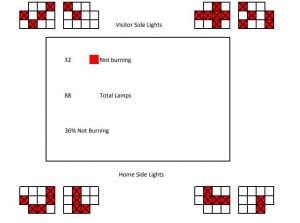 The red blocks showcase all the football stadium lights that no longer work on the field.

The new lights will be installed before the 2019 football season.

“I think it’s pretty good that the lights that were there lasted as long as they did because it was a month ago, we changed out the speakers, and all that and they were totally gone,” stated Board Member Bobby Bearden.
“Would this control module allow some of our technology student to manipulate the lighting system?” asked Board Member Terry Bramlett.

Yes, the system comes with three pre-programmed settings. Once training’s complete, the school and students can create unique light shows.

“It’s a high priority for Mr. Bryce and East Fannin Administration,” “it causes great concern, and we only received one quote back for $25,500.00 for 575 feet to widen it. It will be a dual lane from Old 76 all the way up to the bus line.”

Bryce added that they rearranged the pick-up for safety reasons as well. In the past, The school used two different parent drop-offs, and it caused congestion.

“Where it bottlenecked, they were starting to go out on the gravel and create potholes, so two lanes all the way around will be even safer,” stated Bryce.

Next West Fannin Elementary School requested security cameras to be paid for by a security grant from the Department of Education. The project cleared DOE requirements but needed Board of Education approval.

“What we have now, you can’t even zoom. With this, you’ll be able to tell what color shirt they have on, but you might not see facial expressions,” explained Danner. 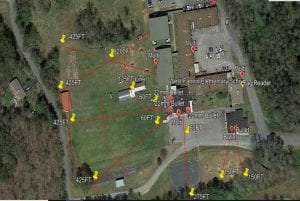 New cameras will let the administration see 425 feet in the distance.

The cameras provide visibility up to 425 feet and the same system as the high school. The connected system allows the administration to view both schools’ security cameras on one screen.

“I think it’s a good use of the state’s safety grant money,” advised Superintendent Michael Gwatney.

Propane bids for the district came in, and one provided a lower price than what the school currently spends on the gas. UPG/ Fort Mountain Propane received approval to supply the district for the next school year.

The turning lane and new entrance for the agricultural center are open and ready for use.

East Fannin painted the dug-outs on the lower field and rusted handrails. The school removed a derelict trailer as well. East Fannin Middle school’s building a new administrative office for the bookkeeper. Additionally, an ADA-regulated walkway extends down to the playground. These walkways can only drop one inch per foot.
Fannin County High School pressured washed the sidewalks and painted as well as sandblasted the rusted stairs.

Local SPLOST taxes paid for the majority of the updates.