“Fannin County School System was honored for farm-to-school excellence at the 2018 Golden Radish awards ceremony on Oct. 22 and we won the platinum level recognition at this awards ceremony,” Sisson said of the new accomplishment. 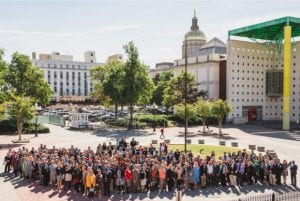 84 districts in Georgia were honored at this year’s Golden Radish Awards.

The farm-to-school program gives students an opportunity to learn the basics of gardening and helps support local economies through local food purchases for school meals.

Among the improvements that led to this achievement upgrade Sisson noted that students had participated in 165 taste tests with local items including a number of fruits and vegetables. Students had also raised and cared for chickens incubating and gathering their eggs.

The Fannin County School System boasts a number of edible gardens throughout the five campuses, as well as each campus having its own greenhouse.

“Out of 84 districts that were recognized, 22 recieved platinum, and Fannin County was one of those 22,” Sisson said of the district being honored.
With platinum being the top level to be achieved by the Golden Radish Awards, Sisson and all of the FCSS will work hard to maintain this accomplishment for years to come.