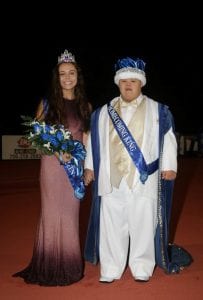 Homecoming King Andy Lim is the son of Tech and Hoa Lee Lim. He participates in Special Olympics, received the Green Hand Award in Future Farmers of America (FFA), as well as the FFA Chapter Degree Award as he was voted “Most Likely to Brighten Your Day” senior superlative. Andy’s post-graduation plans include becoming a Hibachi chef. Andy enjoys fishing, playing on his iPad and listening to music.

Homecoming Queen Kelsey Walton is the daughter of Ryan and Tonya Walton. Kelsey received awards for Spanish one, two, and three. Kelsey’s post-graduation plans include traveling as much as possible, attending Georgia Southern to pursue a degree in business, obtaining certifications in languages and become a Medical Interpreter or an International Business Interpreter. She enjoys reading, traveling, and spending time with her close friends.

Last years reigning Homecoming Queen, Cassidy Graham, attended to pass the crown down unto Kelsey Watson. A big congratulations to this year’s contestants and winners Andy Lim and Kelsey Walton.