After the coin toss, Fannin County High School Rebels received the kick off. The Union County Panthers defense shut the Fannin Rebels offense down immediately and seemed to set the tone for the rest of the game. Rebels didn’t cross the 50-yard line into Panther territory before having to give possession back to the Panthers.

n the Panthers first possession, they made quick work of crossing the 50-yard line into Rebel territory. The Panthers were able to move the ball for a new first down. It didn’t take long for the Panthers to be up 14-0 over the Rebels in the first quarter.

With only seconds remaining in the first half, the Rebels had possession deep in Panther territory. The Rebels had the Panthers end zone in sight. #12 Luke Holloway’s pass was intercepted and ran all the way back for a Panther touchdown, smashing whatever hopes the Rebels had of getting a touchdown.

At the end of the first half, the Panthers had found themselves in the Rebels paint, lighting up the scoreboard and leaving Rebels in the dust 35-0. The Rebels may have felt a little stunned by Panthers fast-paced offense and shut-down defense.

Unfortunately, Rebels #47 Tate Heaton, was ejected from the game due to a personal foul for what seemed to be shoving a Panther’s player after the touchdown. According to GHSA rules, a player ejected from a game is not allowed to play the following game. So, it’s possible that Heaton will not be playing in Fridays game against Chestatee High School.

With a 42-0 lead in the third quarter, this gave Coach Allison a perfect opportunity to rotate players in the game. After the Panthers made substitutions, the Rebels offense was able to move the ball into Panther territory. 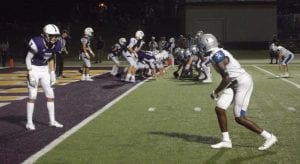 A Rebel highlight, late in the game, Rebels #15, Chandler Kendall, got an interception and about a 15-yard gain, which gave the Rebels the ball. In the last 4 minutes of the game, both Panthers and Rebels opted to run a ground game. The game ended with the Panthers winning 49-7 on their home turf.

The Fannin Rebels will pick up next weeks game at 7:30 at home against Chestatee High School. Come out to support our Rebels as they play their 4th game of the season. Let’s go Rebels!