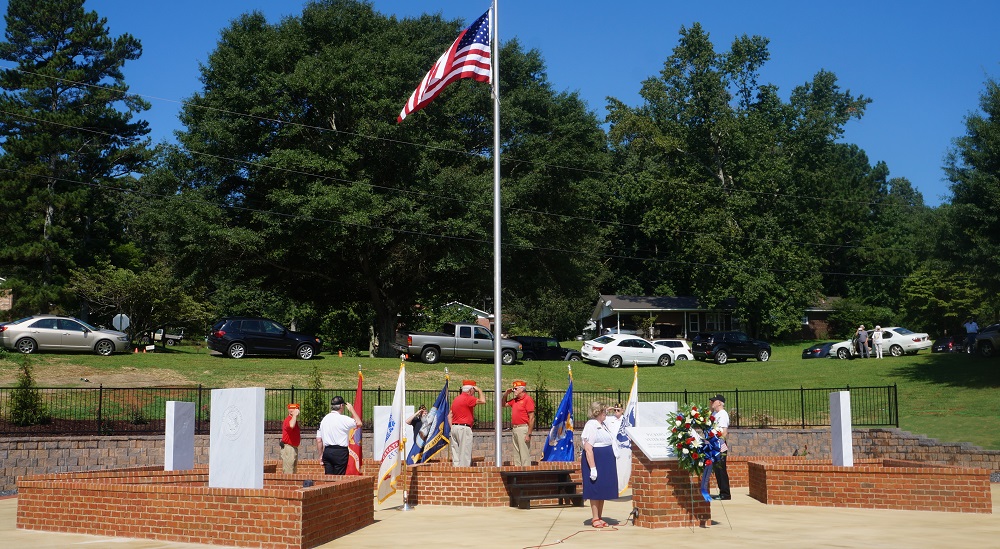 JASPER, Ga. – It’s not Veterans’ Day, but you might think it was if you were in Pickens County on August 9 as they finally dedicated their long-awaited Veterans Memorial next to Lee Newton Park.

Al Parson Larson honors his and others’ service with his final wearing of his uniform from World War II.

Situated at the edge of the parking lot on Stegall Drive, the Memorial opened for the public with an official dedication at 11:00 a.m. The dedication saw the colors of each military branch set in honor at the site while veterans and members of the American Legion hung the American Flag over the memorial. While several people offered words to sanctify the grounds, they added an offering of the 21-Gun Salute and “Taps,” as well.

The ceremony’s impact was only dwarfed by the size of the crowd that attended the day to offer thanks and respect to those who served. Most of them are veterans or have veterans in their family, a fact noted when a speaker asked these people to raise their hands during his speech.

One of those veterans is Al Parson Larson. At 90-years-old, Larson says he served on the USS Astoria, a light cruiser, in World War II. The day’s events held a certain somberness throughout, but meeting Larson punctuated the event as he confessed it would be the last time he would ever wear his uniform. It has been 70 years since Larson last wore his uniform in the line of duty. He says he has reached the point where it is just too difficult to get it on. He chuckled a moment before saying, “At least it still fits.”

Veterans Memorial Park holds 5 smaller monuments in individual bricked in areas becoming part of the larger memorial that hosts bricks of honor for those who wish to purchase them in order to help build, expand, and maintain the memorial. Hoping to extend these bricks across the hillside, they confirmed they are still selling the bricks and will continue selling them indefinitely. 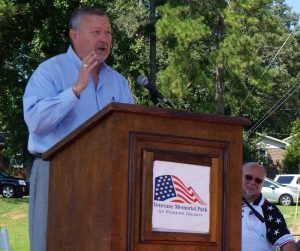 John Trammell, President and CEO of Community Bank of Pickens County, offers his words at the dedication of Pickens’ Veterans Memorial Park.

One speaker noted that 1% of Americans have served in the military, but looking at Pickens County, 12% of those in the county are veterans. Looking at this statistic, it has long been a need to honor that large portion of the community. But the honor is for all those who serve. The memorial has been a long time needed and a long time coming, but today it is finished. It stands as this county’s tribute for those in service.

Summing up the day’s feelings, John Trammell, President and CEO of Community Bank of Pickens County, said, “Vets, thank you for bravely doing what you were called to do so we can safely do what we are free to do.”

Make sure to check out more photos of the day at FYN’s Facebook Page.