Blue Ridge, Ga. – Speaker of the Georgia House of Representatives David Ralston spoke to Fannin County residents at the monthly Republican Party meeting. Ralston gave citizens an update on happenings at the Georgia capital and didn’t shy away from sharing his opinion of the upcoming Republican runoff and the Nov. General Election.

“Ain’t nobody going to know who I voted for,” Ralston said expanding on his opinion over recent endorsements of the two Georgia gubernatorial Republican candidates, “because I want to help bring about…we’re going to need some healing as a party.” 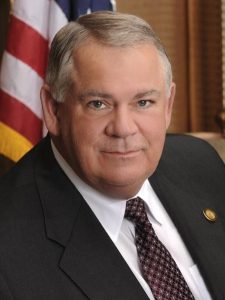 Speaker of the Georgia House of Representatives David Ralston updated residents of Fannin County about happenings in the state capital.

Ralston spoke of the the tough campaign that many in his party have faced and are still facing. He spoke specifically of the gubernatorial race between Lt. Governor Casey Cagle and Secretary of State Brian Kemp: “It’s been kind of…actually kind of nasty.”

Georgia Republicans have a good message according to Ralston and need to refocus on getting out and sharing that message. He would like to see his party “stand together and stand united”.

“It is well funded. It is organized. It is energized. It is unified,” Ralston said of the Democratic Party that is being faced this year, adding, “It’s also more liberal than it was when it was in power last time.”

With redistricting expected to come after 2020, Ralston stressed the importance of coming together as a party in all upcoming elections.

Ralston spoke of his recent trip to Washington D.C. where he was invited to take part in President Donald J. Trump’s Infrastructure Advisory Council. The small group of state representatives spent time talking about issues in their state and met with Vice President Mike Pence and Secretary of Housing and Urban Development Dr. Ben Carson.

“This is a welcome relief that we now have an administration that really does want to hear from us,” Ralston said of his time in our nation’s capital, “and that believes that power comes from the bottom up. Rather than from the top down.”

As far as the work of the last General Assembly in Georgia, Ralston said, “I think that we have had a great session. It is one that I am very, very proud of.”

Among the accomplishments listed by Ralston, the general session achieved fully funding the QBE (Quality Basic Education) which will bring an additional $273,000 to Fannin County Public Schools. The Fannin County School System will also receive $44,000 to put towards added security of school campuses.

Taxes were cut from 6 percent to 5.75 percent with a trigger to drop to 5.5 percent in 2019. Ralston stated that this was the first time income taxes were cut since its institution in Georgia.

“We managed to do that while keeping our budget balanced and maintaining a AAA bond rating,” Ralston added of the recent financial amendments in the state.

Fannin County will also soon see a stand alone campus for the University of North Georgia (UNG). This comes with the state pledging $5.5 million for its construction.

Ralston notes this as a “game changer” for Fannin County. According to Ralston not only will this strengthen ties with UNG in our area but also provide educational opportunities including dual enrollment for local high school students.

Finally Ralston spoke of legislation passed that will allow for “micro hospitals”. These small-scale hospitals will offer acute-care and emergency services as well as short term inpatient care. Facilities such as these typically only house 8 – 15 beds and because of lower overhead are less expensive to operate.

“The first such facility in the state is located just down the road in Ellijay,” Ralston spoke of Piedmont Mountainside Hospital Outpatient Center.
“I have to say, to receive 75 percent of the vote in the district was humbling and beyond our expectations,” Ralston acknowledged his own campaign and the outcome of the May Republican Primary. “It is a real honor to represent this county in the House of Representatives. More than that though I am blessed to call this place home.”