BLUE RIDGE, Ga. – Various candidates spoke at the March Fannin County Republican Party meeting after qualifying week officially came to an end. Mike Cole is one such candidate who will seek a seat on the Fannin County Board of Education.

Cole, a veteran of the United States Marine Corps and current business owner, is a lifelong resident of Fannin County. 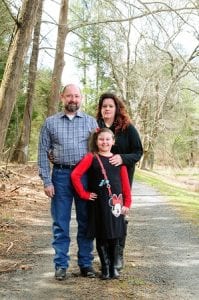 “First of all, I am proud of the Fannin County School system. I love this small town that I was born and raised in,” Cole explained of his roots.
Cole credits much of his direction and success in life to teachings he received while at Fannin County High School.

“While attending Fannin County High, my education path was vocational training. I attended automotive transportation with Tommy Cole as my teacher,” Cole explained of the impact of his personal experience in Fannin County schools. “I have never even told him what an impact he has made on my life with the knowledge he instilled in me.”

Cole went on to work for General Motors and Chrysler and now owns his own automotive repair shop. He is disappointed that the school system has done away with many of its vocational and technical classes such as transportation class, cosmetology, residential wiring, plumbing, and welding.

According to Cole, all of these skills are vital to the growth of our community.

“Not all students that walk in the door are going to go to college,” Cole said, explaining that current school standards do not fit the needs of its students, “so we need to be able to distribute funds in an equal way.”

Cole, who is the father of two Fannin County graduates and has one child currently attending school in the county, said that he does see some areas of concern when it comes to waste and neglect, citing that he has personally taken supplies and toiletries to school to help fulfill the needs of the students.

He would like to put a stop to wasteful spending and make sure that money is being used to truly fulfill the needs of the students and “that every student has the resources available to them whether they plan to enter the workforce, attend vocational school, or attend college.”

“I believe that all of us want to see a return our investment,” Cole stated.

“If you are looking for a yes man, that ain’t me,” Cole said, explaining that if elected, he will truly pursue what is right for the youth of Fannin County.

Cole stated that he is a man of vision and wants “to work with other board members to acquire the assets and resources that will challenge and stimulate the imagination of the students in this Fannin County we call home.”

Cole will face off with challengers Mike Sullivan and Ron Bolin and incumbent Steve Stanley in the May General Primary in hopes of receiving the Republican nomination.