BLUE RIDGE, Ga. – After Qualifying Week came to an end in March, Fannin County got to see its choices for Fannin County Post 2 Commissioner.

Announcements circulated prior to official qualifying of candidate’s intentions to seek this position, but one qualifier chose to wait and announce his candidacy after all proper paperwork and requirements had been met. 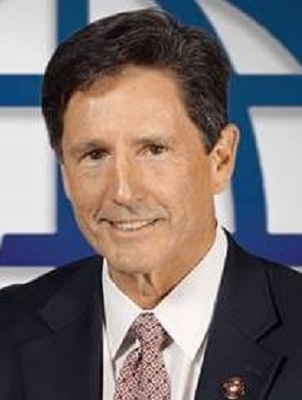 William Hoke “Tripp” Ritchie III spoke with Fannin County’s Republican Party at their March meeting about his plans if elected to the Fannin County Board of Commissioners.

Ritchie, a veteran of the United States Marine Corps, spoke of his 25 years of service and, in particular, his two tours in combat: “This was always home. When you’re in a combat environment and you need a little break you think of where is your home and to me it was here.”

A sixth-generation Fannin County resident and co-owner of Ritchie Creek Farm, Inc., Ritchie spoke of the desire that led him back to Fannin County and how he was able to purchase back some of the land from his family’s original homestead.

“I’m actually living on land that my great-great-grandfather bought, and it’s back in the Ritchie family,” Ritchie beamed of his Fannin County roots as he added, “Real proud of that.”

Ritchie is not a stranger to public service having been a former facilities manager for the town of Hilton Head Island. Ritchie feels that having held this position he is better prepared to serve the citizens of Fannin County.

Ritchie has dedicated much of his life to the service of others. Being a decorated combat veteran and serving as lieutenant colonel in the United States Marine Corps, he went on to be a panelist and presenter in the World Wide Anti-Terrorism Conference of 1999.

Professionally, Ritchie has served as director of Family Support Services and Development and Behavioral Pediatrics at the Medical University of South Carolina and director of the Autism Center and Navicent Health at the Medical Center of Central Georgia in Macon.

Ritchie went on to co-found and serve as executive director of Lowcountry Autism Foundation, Inc., and received the Jefferson Award for public service by the United States Supreme Court in 1995.

“Service to me is when you give more than you have,” Ritchie said, explaining his dedication to our area.

Ritchie plans on running a self-funding campaign and will not be accepting donations. He also spoke of his salary if elected: “I’m donating 100 percent of that to the charities in our community that do service.”

These charities include Snack in a Backpack, Toys for Tots, American Cancer Society, and the Special Olympics.

When it comes to his feelings about his opponents in this election, Ritchie explained, “Anybody that runs for office and holds an office is doing a fantastic service for their community. It really takes a lot of courage to take on that challenge.”

Ritchie will face Republican challenger Glenn Patterson and incumbent Larry Joe Sosebee in the May General Primary. The winner of this race will go on to face Democratic nominee Dixie Carter in the November General Election.