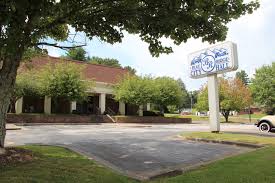 BLUE RIDGE, Ga. – The future of the farmer’s market property and the city pool stood out among five main topics of conversation addressed by the Blue Ridge City Council as well as dozens of attending citizens in a town hall meeting Tuesday, March 27.

In the February and March council meetings, the council discussed options for either selling, leasing or renovating the farmer’s market property off of Summit Street. At the most recent meeting, Jim Sisson, owner of Sisson Log Homes, expressed his desire to either buy or lease the property as an overflow space to use for drying materials for his business.

While the council members seemingly agreed in the past meetings in their desire to renovate the property and to reopen it as an arts and/or entertainment destination in an ideal scenario, the podium was opened to the audience at the town hall meeting for direct input from citizens to gauge the consensus of residents.

Accepting the invitation was Joe Webb, of Dial, who explained that while he lives outside the city limits, he does have an interest in the city, working with the Blue Ridge Community Theater. Among the suggestions put forth by Webb were to use the property as a centralized location for a stand-alone public library or to simply sell the property to the highest bidder in an effort to establish “hotel and some retail density in that area.”

Webb went on to admit while there is some sentimental value attributed to the property, “economically, it’s literally a relic of the past.”

Another citizen, Larry Bersyn, asked about the amount of income the farmer’s market property was contributing to the city.

“So, why do we still have it?” Bersyn asked.

Councilwoman Rhonda Haight explained the farmer’s market is a unique property that the city owns. “It could become a really neat art district, which we don’t have,” Haight added, also stating she would like to see the property double as an event center.

Councilman Nathan Fitts stated he liked the idea of converting the area into an arts and cultural center but was concerned about the cost to renovate.

“We do have somebody who would like to lease it,” Whitener reminded the council, likely referring to Sisson. “So until we we come up with a plan, why do we not consider leasing it out? At least it stops our bleeding.”

Whitener also explained Sisson would be willing to temporarily lease the property and move off the property once the city did produce a long-term plan for the property as long as he was given a 30 to 60-day notice to vacant.

Another citizen pointed out that an arts and cultural district would mostly benefit tourists but selling the property to make way for a stand-alone library would benefit the working people of the community.

Brian Pritchard, publisher of FetchYourNews, pleaded with the council to lease the property to Sisson, a 17-year local business owner, until a long-term plan was established. “Make a long-term plan, but maybe in the short-term, lease it to Mr. Sisson and say, ‘Thank you for being a business owner in the city for 17 years,'” Pritchard said.

Ultimately, Mayor Whitener agreed this was the best option for the city. 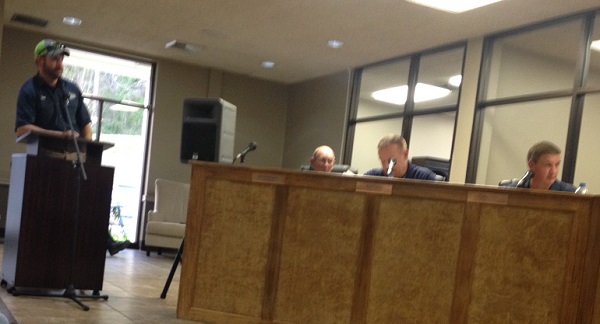 Tony Byrd, city street superintendent and shop mechanic, was on hand at the meeting to discuss maintenance issues with the city pool. Whitener explained the pool has a leak in the main drain and needs replacement of internal filters, manifold gaskets and valves. She also stated there was possible leak in the skimmer system.

Byrd stated to repair the aforementioned issues, the estimate would be between $5,000 and $10,000. If there is a leak in the skimmer system, Whitener stated it would be “many tens of thousands” of dollars to repair. The mayor also said she asked Byrd to present a definite amount to the council by the April meeting for the costs to repair the smaller issues to open it for this summer and then the city would look to the 2019 pool season to have the more expensive issues resolved.

In addition to repairing the pool, the council discussed ideas for constructing a city splash pad and Whitener suggested forming a committee to look for grants and/or create a campaign to generate funds to pay for these projects. 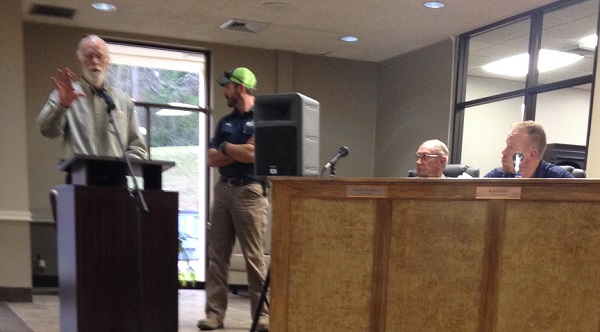 Joe Webb, left, talks with the Blue Ridge City Council about the possibility of working with the county to build an indoor pool facility.

Webb also spoke on the issue and mentioned that the county was studying the prospect of creating an indoor pool at the Tom Boyd Recreation Center. Webb stated he would rather see an indoor pool located more centrally and within the city.

Council members Nathan Fitts and Haight agreed to meet with the county in the near future about the possibility of forming a joint venture to build an indoor pool.

The upcoming Georgia Cities Week, which will take place April 22 to 28 in Blue Ridge, was discussed by the council. Georgia Cities Week is a week-long celebration sponsored by the Georgia Municipal Association (GMA). GMA is a non-profit legal advocacy organization, of which Blue Ridge is a municipality member, that offers consulting services to its member cities.

During the week, Blue Ridge will be coordinating a city-wide litter clean-up campaign in which residents and organizations are asked to dispose of accumulated litter in two dumpsters donated by Advanced Disposal that will be situated at locations within the city limits. Possible dumpster locations discussed by council included the farmer’s market property on Summit Street, near the Co-Op store on East Main Street and possibly at the Kiwanis Fairgrounds.

In the same vein, Council Members Ken Gaddis and Rhonda Haight put forth the idea of the city beginning to conduct a regular small brush pick-up twice in the month of April and again during the fall after leaves have fallen in an effort to keep gutters and storm drains clear of debris.

The city will also conduct a Mayor’s Essay Contest during the week, which will be open to all elementary, middle, high school or home school students. Those participating in the essay contest should compose a 150 to 300-word essay centered around the topic of “If I were mayor, I would …”

Mayor Donna Whitener stated she had recently spoken to representatives from the local chapter of Future Farmers of America (FFA) who expressed interest in participating in a beautification project for the downtown area, which would include situating planters along the sidewalks near downtown businesses. Whitener explained the city would be responsible for the purchase of the planters and plants and “they (FFA) will put (the planters) together for us.”

When the mayor asked local business owner and President of the Blue Ridge Business Association (BRBA) Cesar Martinez of the number of planters he thought would be needed, Martinez said he felt 30 planters would be sufficient.

Regarding another area of downtown beautification, Martinez spoke to the council about the possibility of erecting standards along streets to display small flags or banners. Martinez stated several different types of banners could be produced displaying the various downtown events, such as Fire & Ice or Trout Fest, that take place throughout the year. He added if the city paid for the standards, the Chamber of Commerce and the BRBA would be willing to split costs with the city to produce the banners. Whitener stated she thought the standards ran around $25 a piece and Pam Fink, of the BRBA, said the cost to produce the flags would be around $35 per flag.

Martinez was told to put together a definite proposal to present to the council at a later date.

An update on the current Community Development Block Grant (CDBG) project near Orchard Boulevard was given. The mayor stated the water infrastructure improvement project was scheduled to begin April 5. The council spoke of what to consider for the next CDBG project, and it was agreed that addressing the flooding issues near Ada Street should be the next project.

At the March 13 council meeting, Ben and Natalie Kissel, city residents who live in the Ada Street flood plain, talked with the council about recent flooding problems in that neighborhood. Gaddis reported that he along with a representative from Carter & Sloope, the city’s contracted engineering firm, visited the area Wednesday, March 21, to study the issue.

“There are some serious issues we’re having in flooding areas and we put together a pretty good game plan,” Gaddis explained. He added that surveyors from Carter & Sloope would be examining the area to determine which property owners would need to provide the city with easements to allow the city to move forward with a long-term improvement project. In the short-term, Gaddis stated the city could install storm culverts and water bumper rails to help direct water flow away from owners’ properties.

Whitener also mentioned the city could receive additional state funding assistance by pursuing a WaterFirst Community designation. The mayor said this application process typically takes about six to eight months. The designation is awarded to municipalities demonstrating a strong commitment to water resource stewardship by the Georgia Department of Community Affairs.

A project to construct a two, or possibly three, story downtown restroom facility near the depot was also discussed. According to Whitener, the existing plan to build a two-story facility would cost $450,000 and the city has already been approved for a $300,000 Appalachian Regional Commission (ARC) grant, leaving the city to pay the remaining $150,000. Fitts reported he had heard the cost would be in the range of $750,000.

After Martinez asked about a target date for finalizing plans for the restrooms, Mayor Whitener stated the city would know more after its meeting with the Georgia Department of Community Affairs Wednesday about options for the ARC grant.