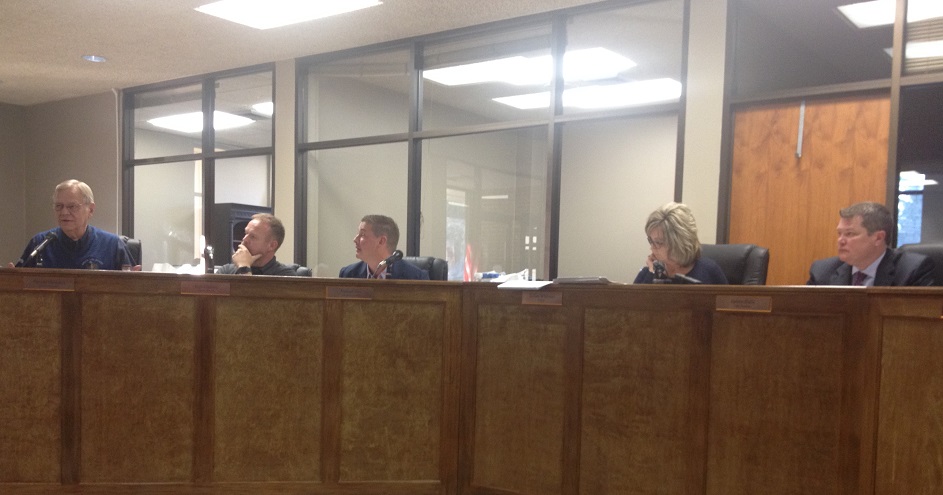 The future of the farmer’s market property off of Summit Street was discussed again. Last month, the council weighed options for the property moving forward and discussed whether to sell, lease or refurbish the property. Strong opposition to sell was voiced by Councilwoman Rhonda Haight and Councilman Ken Gaddis and the council agreed to discuss the issue further at a following meeting.

This month, Jim Sisson, owner of Sisson Log Homes, was present to propose selling the property in a bidding process. Sisson spoke of recent uses, such as held festivals and overflow parking, for the property and stated the property was not an ideal location for either purpose. He also described the property as “negative-performing asset,” meaning that it is and would cost the city more to operate it than the revenue the property would generate. Sisson cited costs for liability insurance and utilities as necessary operating expenditures to the city. Mayor Donna Whitener estimated the city spends between $6,000 and $10,000 a year on utilities alone for the property.

“If you were to sell it us or somebody else, it would at least be bringing in some tax revenue,” Sisson continued.

Whitener mentioned in earlier talks with Sisson, the prospect of leasing the property was discussed. “Have you put any thought into that?” Whitener asked Sisson.

Sisson responded saying his company would prefer to buy the property but would consider leasing it instead. He also added that the property would be used as an overflow area for Sisson Log Homes to store materials in the drying process and no damage would come to the property. “Probably, (we would) not use the platform that is there,” Sisson said.

No decision was made by the council to proceed with any process of either selling or leasing the property.

Another city landmark, the Swan Drive-In, was discussed during the council meeting. Earlier in the day, the city released a statement via social media addressing and denying rumors of the city attempting to close the drive-in as a result of noise complaints received from nearby residents.

In that post, city representatives stated, “The city is committed to working with stakeholders on both sides of the issue to reach a solution that continues to allow the Swan to operate as one of the City’s favorite attractions.”

However, Balli continued to say the city was beginning to look into various options to address the noise ordinance complaints stemming from the drive-in. The city attorney also stated the operator of the drive-in is exploring methods to reduce noise emanating from the site.

“We would always favor citizens working things out privately without any involvement from the city,” Balli said, adding the city was confident a mutual agreement would soon be reached.

Whitener told the council she visited the drive-in over the previous weekend and was told a 20-foot-high, 100-foot-long noise buffering screen is slated to be installed soon. “So, we won’t know (of the screen’s effectiveness) until it goes up. So give us a chance to work through that,” Whitener said.

Later, Councilman Ken Gaddis spoke of the city’s current policy for meeting decorum. Gaddis stated, “The previous council took a stand to where public comments was not necessary, was not required and definitely was not important.”

Garnering applause from the audience, Gaddis explained he would like to see any item requiring a motion go to public comment before moving to a vote from the council.

“I don’t come up and say I know anything really,” Gaddis continued. “You all voted me in. For whatever reason, you all thought I was important. I came up here with a skill set to help with infrastructure, but everybody in the community has a skill set that’s beyond me, beyond (Councilman) Nathan (Fitts), beyond all of us, and you have an important voice and we want to hear that voice.”

Councilwoman Rhonda Haight agreed with Gaddis and clarified she did not vote on the decision to limit public commentary in the last term.

Fitts also agreed with both Gaddis on bringing back increased public commentary and with Haight on enforcing order throughout the meeting.

A budget amendment to account for incoming funds from a Georgia Municipal Association safety grant, maintenance to City Hall and the Police Department buildings, the hiring of a zoning and land development administrator, and revised pay scales for water department employees was approved by the council.

A conflict of interest exemption statement was approved by the council concerning the $500,000 Community Development Block Grant (CDBG) awarded to the city in 2016 to upgrade water and fire protection infrastructure in portions of neighborhoods east of or near East Second Street. The statement gave public notice of technical conflicts of interest among city council members who either live or own property in the area, have family members who live in the area and/or have business interests in the area.

A town hall meeting was announced to take place at City Hall March 27 at 6 p.m. Mayor Whitener explained the meeting will address public concerns over the CDBG project, which she stated should be halfway completed by then, the farmer’s market property, the city pool, and downtown restrooms among other topics.

In other business, the council discussed the abandonment of an undeveloped portion of Hill Street near East First Street and another unnamed street near the BP gas station on West First Street.

The council also approved an annual $1,500 donation to the Humane Society for the spay and neuter of feral cats throughout Blue Ridge.

A resolution declaring April 22 through 28, 2018, to be Georgia Cities Week in Blue Ridge approved and signed by Mayor Whitener.

In public commentary, President of the Blue Ridge Business Association (BRBA) Cesar Martinez stressed to the council the continued need for additional public parking and bathrooms in the downtown business district. Martinez offered the help of the BRBA in forming committees or focus groups to address the situation. In response, Fitts told Martinez both items were top priorities for the council. “We’re not ignoring these. We have a lot going on right now. We are diligently working on them,” Fitts said.

Local sculptor Martin McHan, who created the Blue Bear sculpture that has previously been displayed in the downtown city park, asked about the sculpture’s condition and the kiln-drying process it is currently undergoing. The sculpture was recently removed from the park after a termite infestation was discovered within it. The bear was then transferred to a large kiln operated by Sisson Log Homes in an effort to exterminate the termites. Mayor Whitener explained to McHan after the kiln-drying process is complete, the bear would be painted, restored to the park and the city plans to erect a shelter to protect the sculpture from the weather.

McHan then addressed Jim Sisson directly saying, “Mr. Sisson, I’d like to personally, from the bottom of my heart, thank you … I’d like to thank you for putting (the sculpture) in that kiln because I know how much that costs … It’s a very, very expensive process that this man has donated.”