BLUE RIDGE, Ga. – March 14 marked a nationwide movement among America’s youth. School-age children from across the country banned together in solidarity in a campaign labeled Walk Out.

This protest comes as a response to one of America’s deadliest mass shootings in modern history. Students at Marjory Stoneman Douglas High School in Parkland, Florida, experienced terror in their hallways as a lone gunman and former student went on a killing spree that claimed 17 lives.

In the wake of this tragedy, discussions have opened up about school safety and what can be done to prevent situations like this from occurring in the future.

The Walk Out campaign was organized for students to take a stand against gun violence and to lobby for gun legislation reform. The nationwide walk out was scheduled to take place at 10 a.m. and last for 17 minutes, one minute for each life lost in Parkland, Florida.

A counter-movement spurred as Ryan Petty, a father of one of the students killed at Marjory Stoneman Douglas High School, spoke of a different option than walking out. 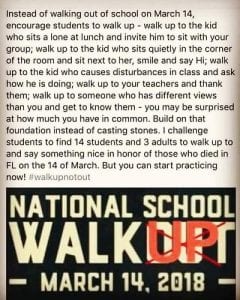 Fannin County High School (FCHS) chose to combine these two movements and provide students with a more politically neutral environment to express themselves and honor the lives of the 15 students and 2 staff members who tragically died.

FCHS conducted one of their mandatory safety drills prior to 10 a.m. and then allowed students to remain outside if they wished for 17 minutes following.

“I had heard where other districts were discussing suspension of students,” Erik Cioffi, principal of Fannin County High School, spoke of the decision made by administration to work with the students during this time, “and that’s not right. We wanted to give our students the ability to express themselves.”

In a statement released by Cioffi via Facebook, students at FCHS conducted a normal school-wide advisement period prior to the safety drill. This advisement period focused on “Acts of Kindness” and how to treat one another with respect.

“It is very real, and it has affected these students,” Cioffi spoke of local impacts from the tragedy. “Some of these students truly question their safety, and we wanted to give them an opportunity to talk and to remember and honor those who lost their lives.”

Staff members were present during the 17 minute demonstration and spoke with the different groups of students that had gathered outside.

In a Facebook statement, Cioffi described his own interactions: “As I walked around outside, I had the opportunity to speak with students and discuss the tragedy that took place and how our number one priority will always be student and staff safety.”

Some students, moved by the demonstration, discussed with Cioffi their plans to follow through with 17 acts of kindness in honor of the Parkland victims. Another group focused on being kind to someone they did not know for 17 seconds.

Cioffi concluded his statement with a plea to parents and a commitment from FCHS:

“Please take the time if you have not done so already and talk with your child about the many issues regarding the horrific event that took place one month ago today at Marjory Stoneman Douglas High School in South Florida. Thank you for allowing us to work with your student(s) each and every day. We are very fortunate to have the student population that we have and we are committed to helping them navigate their way through very difficult times.”