Duncan, who is currently running for Georgia’s Lieutenant Governor, spoke to the crowd about his candidacy and history in politics.

“It is an honor for me to run for Lieutenant Governor,” Duncan said, addressing Fannin County’s Republican Party. 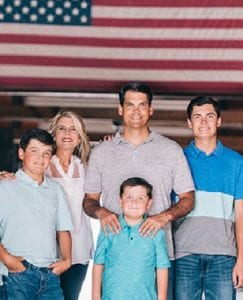 Republican Geoff Duncan says his family is running his campaign as a team.

Married with three sons, Duncan explained that his family is his team: “We’re doing this as a team. This is the hardest thing we have ever done.”

Duncan attended Georgia Tech and went on to play professional baseball with the Florida Marlins for six seasons. After his retirement from sports, Duncan focused on several successful entrepreneurial ventures.

“I certainly didn’t grow up in politics or my family have a life in politics. I didn’t go to law school, no offense against any attorneys,” Duncan joked as he explained his past and what sets him apart from other politicians. “I didn’t have this big appetite for politics growing up, but I was paying attention.”

It was during a church seminar that Duncan was inspired to become a public servant. While studying Andy Stanley’s Recovery Road, a revelation hit him.

“If we’re going to recover as a country, it’s got to start with us,” Duncan told attendees of the message that stuck with him from that seminar.

Duncan added, “We’ve gotten really good at complaining, but we’re not doing anything about it.”

Discussing the Conservative message, Duncan feels that it is lost because it is not shown by example from many of the Republican leaders: “We talk about prayer in school. I’ve never met a representative that doesn’t want prayer in school, but not enough representatives are praying with their kid next to their bed every night.”

Duncan was first elected to the Georgia House of Representatives in 2012 for the newly formed 26th District.

Since being elected to the Georgia House of Representatives, Duncan has authored several pieces of legislation such as HB 749-The Cargo Theft Act. Before the enactment of the Cargo Theft Act, criminals in the state of Georgia who stole vehicles carrying cargo were only charged with theft of the vehicle and not the cargo it was hauling.

With the passing of the Cargo Theft Act, penalties for such a crime are much stiffer, and Duncan cites that crime of this nature decreased by 68 percent within the first year of the bill being enforced.

Duncan also authored HB 152-Michael’s Law, which states that individuals must be at least 21 years of age to enter an establishment whose primary business revenue is in the sale of alcohol.

Most recently, Duncan authored SB 258-the Rural Healthcare Bill which is said to bring over $250 million to Georgia’s rural hospitals.

Duncan is also a strong proponent of tax reform on a state level: “We, as Republicans, have got to stop taxing people because we can get away with it.”

Some of the duties of Georgia’s Lieutenant Governor include picking or being a heavy influence in the decision of committee chairs and members. The Lieutenant Governor also is charged with the process of deciding which pieces of legislation come to the floor of the Georgia House of Representatives.