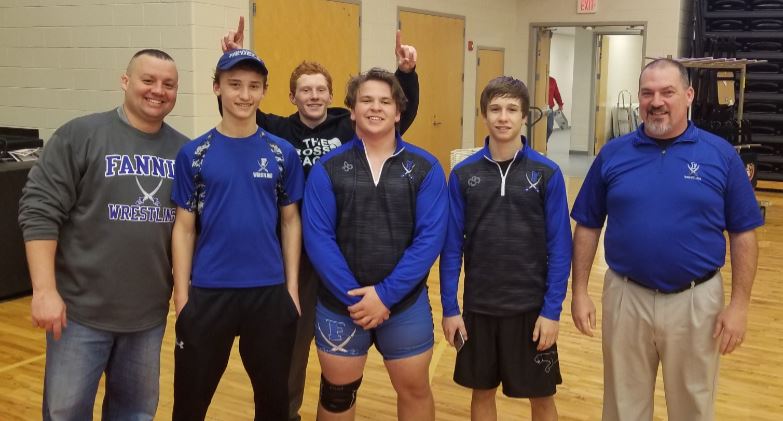 Since taking the reigns of the wrestling program at Fannin County High School, head coach David Henson has been working to create a winning culture.  Each year he begins the season with a team meeting, where he discusses team and individual goals and expectations.  While he expects his athletes to have fun, he also pushes them to toe-the-line, hoping to see them standing on the podium at the end of the season.

This year, three of Fannin’s varsity boys have fought their way to the big finale – the GHSA Traditional State Championships.  The tournament will be held in Macon later this week. 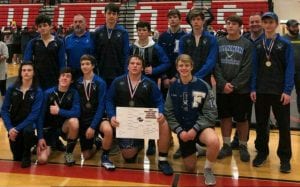 To get to the state event, wrestlers first had to place within the top four of their class at Area competition.  In doing so, they then qualified to compete at the Sectional tournament this past weekend at Greater Atlanta Christian School.  The Area 6-AAA meet was held last weekend (Jan 17) at Morgan County High School in Madison.  113 lbs sophomore Landon Galloway (2nd Place),  126 lbs freshman McCay Turner (4th Place) and  heavyweight senior Bradley Flowers each qualified to advance to the Sectional meet.  Flowers was the Area Champion, going undefeated in the event.

“It felt great to win,” Flowers told TeamFYNSports after winning the Area tournament.  “Coach Henson and Coach Hutsell have been telling me to keep working hard in practice and this is something I’ve trained hard for.”

At the Sectional meet, the top eight finishers qualify to advance to the state tournament in Macon.  Flowers finished 3rd, Turner finished 4th and Galloway once again came away with a 2nd place finish to advance all three teammates to state.

At the state tournament, Flowers (31-6) will face Dalton senior Walter Richards (54-5) in his first match to kick off the bracket.  Turner (41-10) will face senior Blake Rice (3-0 in the 126-lb class) of Hall County; and Galloway (30-7) will lock horns with Calhoun freshman Blake Bailey (27-10).  Weigh-ins are at 10am on Thursday morning and TeamFYNSports will be on location, posting updates on twitter and facebook throughout the tournament.