BLUE RIDGE, Ga. – Parents of Fannin County school children gathered at the Jan. 11 Board of Education meeting to express their concern and anger over the current state of the Fannin County Athletics Department. 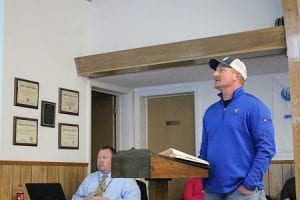 Donnie Kendall addresses the Board of Education about Fannin County Athletics.

Accusations of student favoritism, parent interference, and overall lack of accountability among administration were discussed as parents addressed the board.

First to speak during the public commentary portion of the meeting was parent Donnie Kendall.

“We have a culture here at this school that has been accepted and embraced. That’s a losing culture, and it’s considered the norm,” Kendall spoke of Fannin County Athletics. “If we continue to accept mediocrity as being good enough, then your endeavors will always be mediocre.”

Kendall cited that parents and residents are told that Fannin County is small and rural, and therefore not able to attract or produce the athletes like areas with a larger population.

“This is simply not true,” Kendall stated of the athletes in our area. He pointed to Union County as an example. This county according to Kendall is smaller and just as rural, but manages to play in the same AAA region with much better results.

Kendall spoke directly of assistant principal and athletic director Dr. Scott Ramsey: “We have an athletic director who makes $93,000 to run these programs, whose job undoubtedly ends at 4:30 so he can go to his second job while different administrators are asked to cover for him at our sporting events on a regular basis.”

Coaches in Fannin County are paid a premium salary according to Kendall and “all finish dead last respectively in their regions almost every year.”

Kendall did praise the community of Fannin County for their enthusiasm and support of the school system’s athletics and commented that the booster programs consistently raise $30,000 to $50,000 a year.

“I think it may be time for the community to match the effort of our administration and our coaches and suspend some of our fundraising,” Kendall remarked about actions to take until significant change happens within the program.

Ryan Walton, another parent with children who participate in numerous sports, also spoke during public commentary. 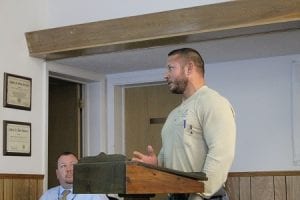 Walton began, “My problem with the athletics here, and I don’t speak just for myself, when you get coaches here that will play to win instead of letting parents influence who plays sports, who starts, you’ll have a little bit better result.”

Walton spoke of parent influence over coaches, “It’s obvious that it goes on,” and spoke of his own son, “He should play because he’s good enough not for what I do for that team.”

Other issues mentioned at the meeting were athletes being asked to pick a sport that would be their primary sport and the coaches lack of flexibility for students who participate in multiple activities. The practice of Fannin County’s basketball coach starting with a team in middle school and then moving up with that team to high school was also brought up.

“It’s not moral, it’s not ethical, it’s not right,” Walton said on the issue of coaches moving up with teams.

Walton stated, “I could stand up here for 24 hours and not repeat myself about all the stuff,” and concluded, “Something needs to change. I’m tired of losing. Our kids deserve better. I know mine do. We’re paying people a lot of money not to do their job.”

Other parents were scheduled to speak but expressed that their concerns had been addressed by both Kendall and Walton. Ultimately, the group wanted answers for who is accountable for the Fannin County Athletics Program and for that person or persons to make significant changes soon.

Stay with FetchYourNews as we follow up with the Fannin County School Board and Fannin County Athletic Administrators on issues discussed at the Board of Education meeting.