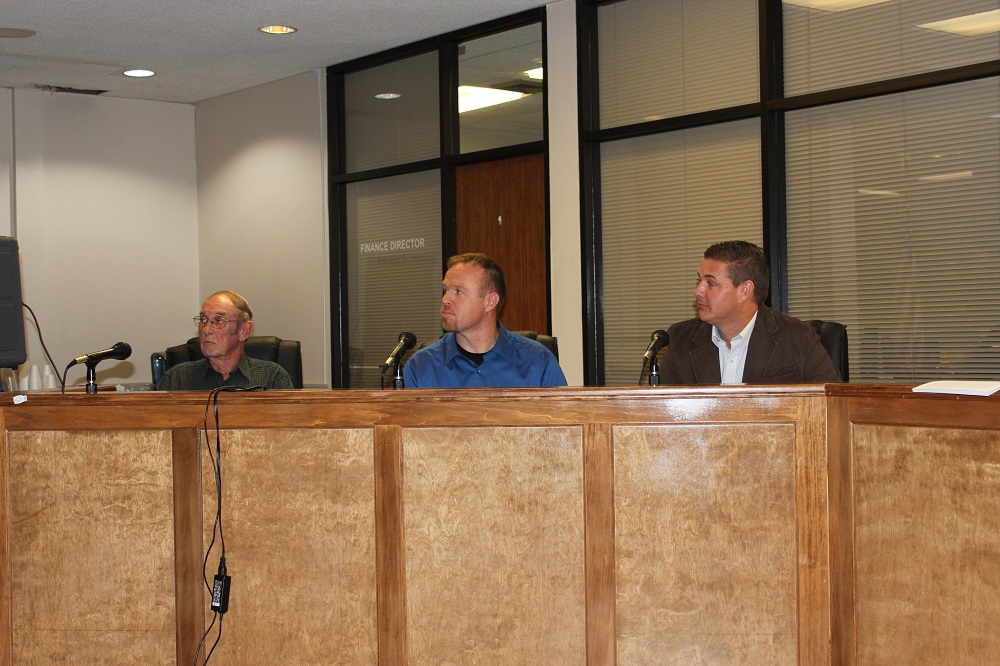 BLUE RIDGE, Ga. – In addition to taking the oaths of office and appointing several city positions, the Blue Ridge City Council addressed a number of business items during its meeting Tuesday, Jan. 9.

Headlining those items was discussion about a vacant lot previously occupied by Temple Baptist Church on West Main Street between Messer and Mountain streets. Councilwoman Rhonda Thomas-Haight explained that Blue Ridge Hotel, LLC, the group that purchased part of the lot, has offered to let the city lease the lot, which has space for about 200 vehicles, from Jan. 15 through at least July 15, 2018. 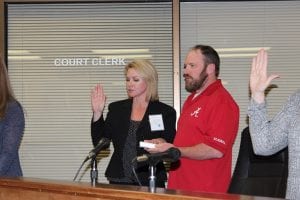 Councilwoman and Mayor Pro Tempore Rhonda Thomas-Haight takes the oath of office Tuesday night while her husband holds the Bible.

Thomas-Haight stated Blue Ridge Hotel outlined certain lease terms for the city to follow, which included the city providing liability insurance through the term, maintaining the lot, repairing cable fencing and taking responsibility for parking, logistics and fee collections of the lot. According to Thomas-Haight, the group requests for a 50/50 revenue split with the city; however, it was undecided as to how, or if, the city would collect parking fees for the lot.

Thomas-Haight suggested establishing a donation box system similar to that seen at a parking lot on East Main Street. “People, on their own volition, will put their money in there,” Thomas-Haight explained. “They’re going to it because it’s the right thing to do and they’re asked to do it.”

The council unanimously approved the contract with Blue Ridge Hotel, LLC contingent on City Attorney James Balli reviewing and approving the terms of the agreement.

A Community Development Block Grant (CDBG) water system improvement project was awarded to The Renee Group, Inc., of Doraville, Georgia. The Renee Group submitted the lowest bid for the project, which will upgrade water systems in the Orchard Boulevard neighborhood, at $505,719.80 and was recommended by the city’s water system engineering firm, Carter & Sloope. Mayor Whitener explained because this item was tabled from the December meeting, crews from The Renee Group were ready to begin the project within a few days.

The council approved $5,450 of its $8,450 annual contribution to Mountain Regional Library System (MRLS), which includes the Fannin County Public Library. Mayor Whitener explained that the partial amount approved was due to the unbalanced schedule of fiscal years between the city and MRLS, and that the remaining amount is approved by the city at a later date.

The possibility of reopening a small portion of Chastain Street was discussed after Whitener stated development activity has occurred recently in that area. Whitener said she would contact local surveyor Lane Bishop to survey the area and come back to the council with further information regarding the reopening. 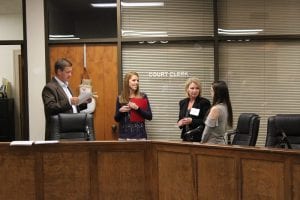 A permanent backhoe was purchased by the city for $65,526. Currently, as City Clerk Kelsey Ledford explained, the city rents a backhoe for projects for $1,700 a month. Ledford told the council the city has applied for and is eligible to receive a United States Department of Agriculture (USDA) grant of $25,000 with a loan for the remaining balance. However, Ledford also stated the city has not yet been officially approved for the grant and loan. Despite this, the council voted unanimously to purchase the backhoe from Yancey Brothers heavy equipment dealership.

Two invoices from Carter & Sloope were approved by the council. A general consulting invoice for various city projects from Sept. 17 to Nov. 26, 2017, in the amount of $15,361.25 was approved. Another invoice for $32,034.75 for monitoring of mercury and copper at, as well as other services related to, the city’s wastewater treatment facility was approved. Councilman Nathan Fitts questioned the specificity of the invoices and suggested a better breakdown of services rendered be presented to the city from Carter & Sloope in the future.

Also approved by the council were a number of quotes and invoices, which included:

FetchYourNews is a hyper local news outlet that attracts more than 300,000 page views and 3.5 million impressions per month in Dawson, Lumpkin, White, Fannin, Gilmer, Pickens, Union, Towns and Murray counties as well as Cherokee County in N.C. FYNTV attracts approximately 15,000 viewers per week and reaches between 15,000 to 60,000 per week on our Facebook page. For the most effective, least expensive local advertising, call 706-276-6397 or email us at advertise@FetchYourNews.com