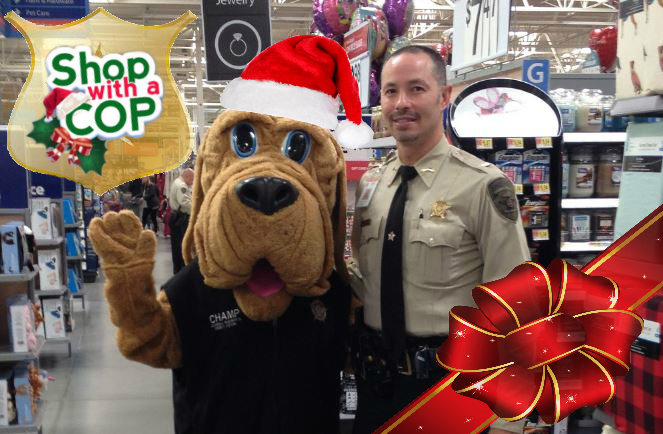 BLUE RIDGE, Ga. – Smiles, both on the faces of children and law enforcement officers alike, were seen up and down the aisles Saturday, Dec. 16, at the Blue Ridge Wal-Mart during the Fannin County Sheriff’s Office (FCSO) Shop with a Cop.

Originally scheduled for Dec. 9, the fourth annual Shop with a Cop was delayed a week after Winter Storm Benji treated kids, and kids at heart, to a weekend of snowman building and sledding. After a breakfast at Fannin County Middle School, the Christmas shopping tradition kicked off at Wal-Mart around 10:30 a.m. with a large number of children and officers from the department strolling up and down the aisles searching for holiday treats and gifts. On Saturday, 43 children were given a $100 spending allotment to purchase gifts of their choosing for themselves and others. As usual, the toy section of the store was a busy place to be during the event as children picked out a wide variety of cool looking toys and games. 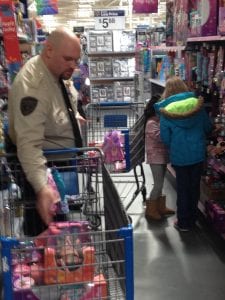 FCFD officer John Kinser watches over some holiday gifts as two young girls pick out some more items to load up the cart.

Lt. Darvin Couch, of FCSO, serves as lead coordinator event each year. Couch described the annual event as “an honor and a privilege” to help provide a memorable Christmas for children across the county. Couch, the lead school resource officer at Fannin County Middle School, applauded the efforts and generous donations from the community members and organizations throughout the county.

“It’s a humbling experience to be able to do this,” Couch explained. “We have a community that is very gracious. We couldn’t do it without the community … (and) without the community’s help – volunteers that come to shop with (the children), which is law enforcement, fire and safety, EMS (Emergency Medical Services), first responders, firefighters.”

Also, Couch placed a great importance on seeing the smiles on the faces of the children each year as the most inspiring aspect of the event and spoke of “building a bridge” between the officers and the children at an early age.

One of the most remarkable lessons Couch said he sees every year is the charitable nature of the children using their allotment to buy gifts for their families as well. 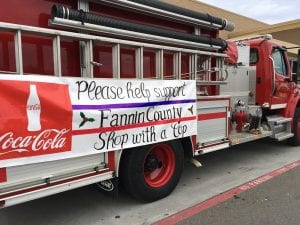 The Fannin County Fire Department raised almost $1,900 in a boot drive for Shop with a Cop Nov. 25.

Among the many businesses, organizations and individuals in the community that helped with this year’s Shop with a Cop were the Fannin County Fire Department. According to Fire and Rescue Chief Larry Thomas, FCFD collected nearly $1,900 from generous holiday shoppers Saturday, Nov. 25, during a “fill the boot” fundraising campaign held outside the Blue Ridge Wal-Mart.

In addition to this, the Rotary Club of Blue Ridge presented a $1,000 donation to Lt. Couch and Shop with a Cop during a luncheon held at the Fannin County Chamber of Commerce Nov. 28.