On Saturday evening, the Fannin County Fire Department (FCFD) responded to a 9:12 p.m. call of a residential fire at a rental cabin on 885 Brittney Dr. in Epworth. Crews arrived on scene at 9:34 p.m.

According to Fire Chief Larry Thomas, the fire began in an outside chimney and quickly spread to endanger the house. Fourteen firefighters along with three engines and two tankers were able to contain the fire to the chimney.

No injuries were sustained as a result of the incident, Thomas said. 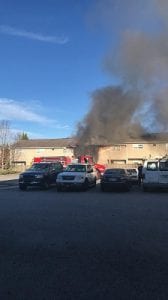 Later in the weekend, FCFD was dispatched to a report of a fire located at the Mineral Springs apartment complex at 3:46 p.m. Sunday, Nov. 26.

Kelly Wisner, a resident of Mineral Springs Apartments, recounted the events that took place that afternoon. “I had just woken up from a nap and looked out my window,” Wisner explained. “I saw smoke and told my husband the building across from us was on fire. We immediately got on our shoes and split.”

Kelly Wisner and her husband, Jason Wisner, ran to the building that was on fire and adjacent buildings to warn residents of the fire and the need to evacuate and move their vehicles. Kelly Wisner also placed a call to 911 during this time.

Meanwhile, Jason Wisner ran into the building that was aflame and banged on doors alerting everyone to get out. Kelly Wisner, when speaking of her husband’s courageous act, said, “He doesn’t look at himself as a hero. He just says that he did what anyone would do.”

According to a representative with Mineral Springs Apartments, three units suffered damaged due to the fire. All units in the building, however, must remain vacated until an inspection can be done and power is restored.

In addition to the residents who got out of the building safely, FCFD also reports that they were able to rescue six cats, one pet snake and one pet canary.

FCFD also responded to a fire located at the Open Arms home. A call came in at 8:36 p.m. Sunday, Nov. 26, and units were on scene within 18 minutes.

Open Arms is a nonprofit organization for children who have been abused or neglected. The program offers a number of services including short-term residential care.

“It’s with a sad heart that I inform you that around 8:30 p.m. last night (Sunday Night) a fire occurred at the Open Arms Home for Children. All of our girls and staff got out of the home safely and unharmed but our home is most likely a complete loss.”

It went on to say:

“God spared our girls and staff tonight. A few hours later and they all might have been in a deep sleep and the outcome could have been much more devastating.”

A state investigator was on the scene of the Open Arms home fire for suspected arson. Captain Justin Turner with the Fannin County Sheriff’s Department was able to confirm that the fire was intentionally set and a juvenile is currently in custody.

The case remains an open investigation.

One of Advanced Disposal’s compactor trucks had caught fire. The cause of the fire is undetermined and currently still under investigation.

No one was injured during this fire. The compactor truck suffered significant damage and damage to other vehicles parked nearby was also reported .