BLUE RIDGE, GA – The Fannin County Board of Registration and Elections are set to inspect the county’s voting precincts.

At the Nov. 6 meeting, board members set a tentative date to begin inspection of the voting precincts throughout the county. These inspections are conducted regularly to ensure the buildings are ready for voters during an election season. 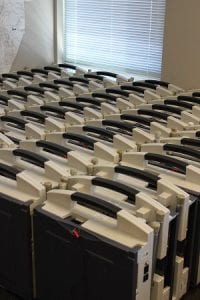 The Mobile precinct is in need of having hand rails replaced and the handicapped parking spaces repainted. There are currently nine precincts in the county that are due for inspection.

Fannin County received 143 new applications to become a registered voter in the month of October. Many of these applications were due to the recent city of Blue Ridge election.

Vice Chairperson Mary Ann Conner explained that there are still new registrations to add: “The new applications, the cut off for that was October 10 because of the Blue Ridge City election. We’re still adding the ones in the county.”

After receiving new touch-screen voting machines, Fannin County listed the older machines for other counties within the state to claim for use. The older machines were state-issued to the county and had been in use since 2002.

These machines were offered to Georgia counties at no cost. Board Member Wanda Collins explained, “These were state-issued machines. We didn’t pay for them.”

DeKalb County has contacted the Board of Registration and Elections expressing that they would have a need for the machines in their county. Kennesaw State University (KSU) must test and certify the machines before they can be moved to DeKalb County.

There is currently a wait to have this process completed. Conner said, “The state has got them on hold. They’re not letting (KSU) do any testing. So right now, we’re keeping them here with us until then.”

KSU is expected to resume testing early in 2018. Conner went on to say, “Once they get them tested, then we can notify DeKalb county, and they will come pick them up.” There is a total of 71 TS Machines from Fannin County to be tested and certified.