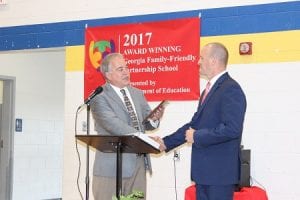 The gym was filled with students, staff, and family as the school met with Georgia’s School Superintendent Richard Woods. Excitement was high as only five schools are chosen annually for this award.

The Georgia Department of Education launched the Georgia Family Friendly Partnership award in the summer of 2010. This honor is for Title I schools who place importance on the role of the family in a student’s education.

Schools are judged on a number of factors including friendliness and helpfulness of the staff, displays of student work throughout the building, and the school’s ability to provide “unique and innovative parent and family engagement programs.”

Fannin County School Superintendent, Dr. Michael Gwatney was present to speak at the ceremony. Gwatney has a long history with EFES. He attended the school in the late 1980s when it was a junior high school. He then taught at the school as an educator, and later became principal. 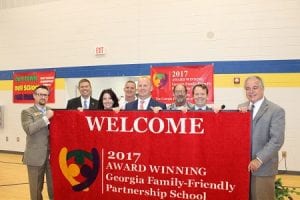 Gwatney said, “As member of this community, as well as former student, and former member of this faculty, I can honestly say that welcoming and family are two great words to use when describing East Fannin Elementary School.”

Parents were also present to speak of their experiences with EFES. Parent Adam Born said of EFES and the parent involvement, that it is more than just a school, it’s a community.

The entire student body worked with Music Teacher Kimberly Huffman to prepare a song for the visitors. Smiles of enjoyment were seen on the state representative’s faces as the students performed “Kick It Up A Notch”.

The unique song choice reflected EFES’s staff involvement and dedication, both of which are key components to having won this award.

Georgia School Superintendent Richard Woods spoke at the presentation. He explained the process on which the schools are chosen, and stated that within the three years he has presented this award that the EFES’s presentation was the first time where he had seen family presented as speakers for the school.

Woods stated, “Hats off to your presentation.”

He went on “This is something that is extremely hard to get. Roughly we have about 2,300 schools in the state of Georgia. There are only five schools that get this each year. You’re really in the top 1% of the 1%.”