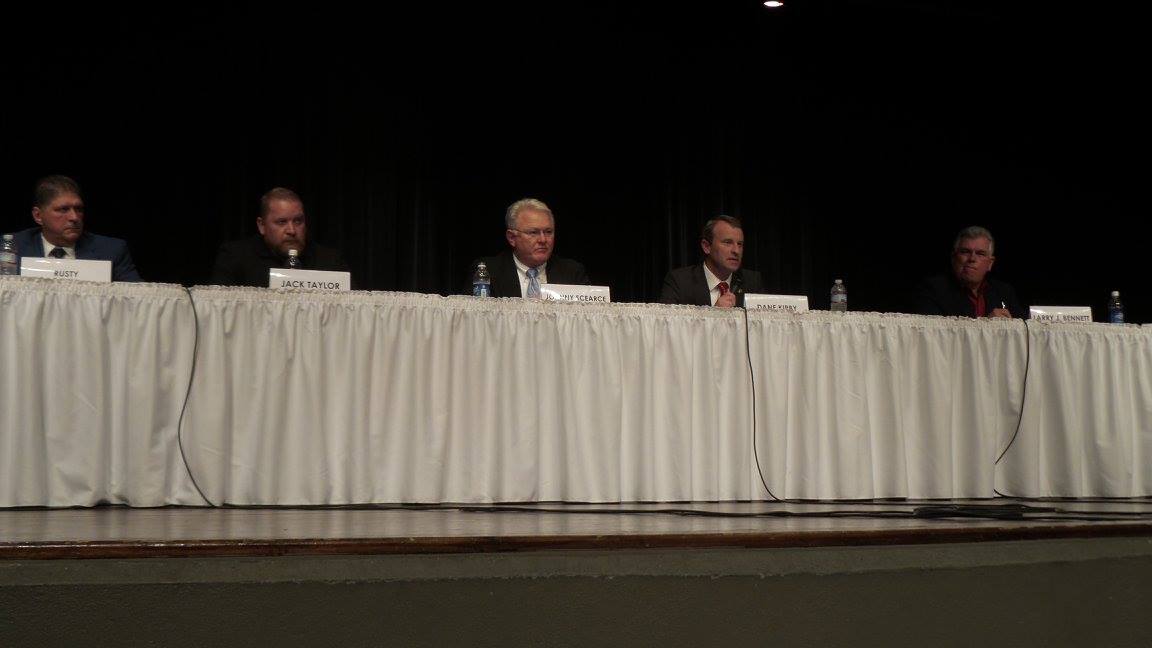 There are five candidates in the Sheriff’s race in Fannin County – four Republicans:  Larry Bennett, Dane Kirby, Johnny Scearce, Jack Taylor and one Democrat – Rusty Whittenbarger.  All five spoke at the candidates’ forum . The Sheriff’s race offered more nuanced differences between the candidates than was present in the other of the evening’s forum participants.  All candidates have extensive experience in law enforcement and law enforcement leadership.  All spoke about present and future Sheriff’s Department budget needs and communication between different police districts in the county. They all agreed that drugs were the biggest criminal activity facing Fannin.

Candidates Dane Kirby, Johnny Scearce and Rusty Whittenbarger specifically commented about the Sheriff’s Department’s budget.  Mr. Kirby promised to fulfill the department’s obligations without running the budget through the roof.  Though, he did say that there is a time in the near future when the department will need a bigger budget. Also, Mr. Kirby would like to add more personnel and funds to deal with the drug problem. Mr. Whittenbarger said that the department needs to be frugal and cut spending, but will need a bigger budget to accommodate building a new jail. Mr. Scearce wants to rearrange current funding and responsibilities so that he can have extra eyes on the roads

Forum moderators asked the candidates how they would work with other agencies to facilitate cooperation.  Mr. Scearce said that as Chief of Police in Blue Ridge, he has never had a problem with other agencies.  He looked at his fellow candidates and said we are a brotherhood of police.  The candidates that followed him took up the idea of brotherhood of police. Jack Taylor’s idea is to hold monthly communication meetings with representatives from the different precincts in Fannin.  Larry Bennett said that his experience and humbleness will strengthen communication.  Mr. Kirby said that he has already done a lot of work to facilitate communication and that there was never a time that another agency was turned down.  Mr. Whittenbarger said that unity has never happened in Fannin County law enforcement and that he can bring about unity.

Candidates Jack Taylor and Johnny Scearce see that the drug epidemic in Fannin needs two avenues to solution: one avenue that deals with the criminal activity associated with drug dealing; and a second avenue that sees addiction as a personal obstacle which the Sheriff’s Department can help addicts and their families progressively solve.  Mr. Taylor’s knowledge comes from his personal experience of dealing with a child who is an addict.  Watching his child in mire himself in bad decisions has given him the strongest anti-drug criminality agenda of the candidates and has taught him that he has to hit at the drug problem from all angles.  Mr. Scearce believes in a pro-active solution that helps people deal with their problems rather than destroy homes.  Mr. Kirby would like to add personnel to open up more time for narcotics investigations.

Four of the candidates gave similar answers about how they want to deal with the public and employees within the department. Mr. Bennett says his Christian belief molds his desire to treat the public with compassion, respect and fairness.  Mr. Sceare wants to bring integrity, honesty and fairness into the office and dispense the law equally, fairly and justly.  Mr. Whittenbarger will use a board of citizens and officers to conduct exit interviews when Sherriff’s Department employees leave their job so that the former employees can speak frankly.  Mr. Taylor wants to see people treated fairly and not with differences.  Mr. Kirby didn’t speak as plainly about the temperament qualities he will call upon when dealing with the public.

Individual candidates did have a specific agenda items they would put in place. Incumbent Dane Kirby spoke about his continuing to maintain a professionally run office where officers are held to a higher standard. Mr. Kirby will also continue to provide professional training to officers and law enforcement education for the general public. Mr. Bennett will bring changes in attitude and actions.  Mr. Scearce wants to increase eyes on the ground through patrols and develop an office that can accommodate needs of a tourist area, which last year had 18 different events that drew major crowds.  Mr. Taylor will hunt down people involved in the drug trade and throw them in jail.  Mr. Whittenbarger will make sure Sherriff’s Office programs are distributed equally throughout all constituency groups.

FetchYourNews is compiling voters’ questions to the candidates.  If you have any questions for  Mr. Davis, Mr. Farmer or Mr. Galloway, submit them in the comments section at the end of the Fannin Elections Voters’ Guide. Please don’t include editorial statements in the question. FetchYourNews will be asking candidates these questions in interviews throughout the campaign season.