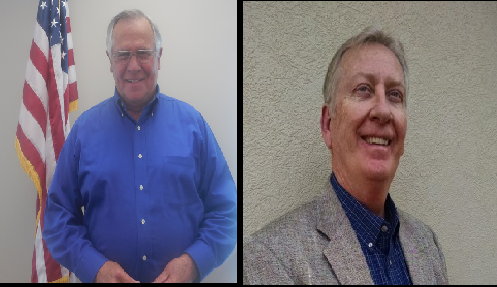 In the Board of Commissioners Chairman race, the emphasis in answers was we don’t need a fix versus Fannin county government needs more transparency, accessibility and forward motion.

Mr. Simonds point was, “if it ain’t broke don’t fix it.”  His examples of how the Board of Commissioners isn’t broken is that the county has stayed in the black during his term. Mr. Simonds reminded the audience about the new 911/EMS center and an industrial park that the Fannin County Development Authority is building. When asked about what he wanted to accomplish over the next four years, Mr. Simonds replied that he would keep doing what he is doing: paving roads, constructing the 911/EMS center, bettering the courthouse parking situation and chasing grants for funds which will keep the millage rate low, as it has been for the last eight years.

Helton offered concrete examples of how he would fix things in the county.  One is keeping people up to date on how road improvement projects were going with the simple fix of keeping the projects and their progression readily available on the county website. Mr. Helton’s vision for tightening up Fannin county’s budget is to examine the $886 per citizen per year that the county government spends whereas counties surrounding Fannin spend 37% less per capita than Fannin does.  He also wants to move the Water Authority towards more self-sufficiency so that all of its revenue will come from billing customers.  Currently, the county financially supports parts of the Water Authority until the Authority’s income is greater than its expenses in setting up a new public utility.  Other items on Mr. Helton’s to do list are more competitive garbage pick up contracts and improvements in recycling and a 10,000 sq. foot stand-alone library.

When asked about the challenges the county will face in the next four years, the two looked at different themes.  Mr. Helton cited the doubling of Fannin population from a decades long steady number of approximately 14,750 to its current amount of 25,000 calls for managed growth.  He wants the Commissioners to anticipate changes that a large influx of new residents will bring while working to maintain Fannin’s culture and traditions that brought people here.  Mr. Simonds said the challenges would be to: manage the budget, keep doing what we are doing, pave roads, take care of local charities; look at courthouse and new jail needs.

The two also touched on library funding, which is a hot topic about town due to the possibility of library funding coming up on the SPLOST ballot in November.  Mr. Simonds said that he would look into the library.  Mr. Helton said that he would promote a stand-alone library which will also give the courthouse extra space; however, he does not think that the county needs a library that costs $4.5 million.

In closing statements, Mr. Simonds said with pride that Fannin was one of the few counties in Georgia to remain financially solvent throughout the Recession and that he is proud to live in a county that is head and shoulders above any county in Georgia.  Mr. Helton asked the audience if they wanted to continue with another term of a Chairman that believes it is my way or the highway.  Mr. Helton said that teamwork and training are ways to grow an efficiently run local government.  He promised not to manage the old-fashioned way but to manage through he learned as a Petroleum Industry manager.

FetchYourNews is compiling voters’ questions to the candidates.  If you have any questions for  Mr. Simonds or Mr. Helton, submit them in the comments section at the end of the Fannin Elections Voters’ Guide. Please don’t include editorial statements in the question. FetchYourNews will be asking candidates these questions in interviews throughout the campaign season.