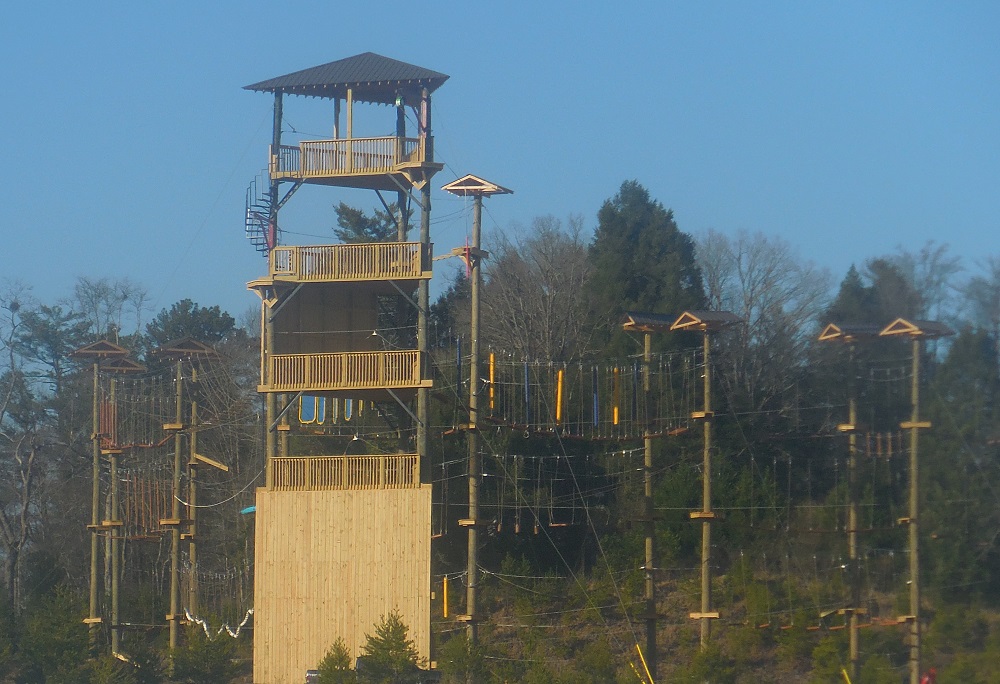 The “zippy” tower at 515 and Boardtown Road.

Soaring above 515 at the intersection of Boardtown Road is Blue Ridge’s latest adventure spot, Blue Ridge Aerial Adventure Park, which should open later this year.  FetchYourNews.com has received reader requests to find out the story behind the tower, especially zoning, building and safety issues with the project.  Since the site is within Blue Ridge, FetchYourNews.com turned to Roy Parsons, Director of Zoning and Building for the City of Blue Ridge to help with these answers.  Mr. Parsons chuckled a bit when asked because he has received many inquiries about the property as well.

The site of the park, wedged between 515 and Boardtown Road is zoned commercial and has been since the early 2000’s.   If there were any question as to the impropriety of zoning, it would be directed toward the previous owner.  At the time the property was first developed, the developer said that it and the nearby property around Dunbarton Farms road would be a residential area.  However, said Parsons, the raw land on those pieces was manipulated in such a way that it would only be fit for commercial rather than residential use.  In fact, the former developer contemplated having a hotel there.  The current owners, Blue Ridge Aerial Adventures, LLC, decided to create a zip-line entertainment venue there, which is permissible in commercial zones.

American Adventures Park System designed the park.  The company also developed the highly-successful Banning Mills Zip-line Park  near Carrollton, GA.  In 2012, the Guinness Book of World’s Records declared this park as the largest and longest zip-line canopy tour in the world.  Once finished, an engineer from the company will inspect the structure to see if it agrees with international building codes.

People have also questioned the legality of the Adventure Park’s entrance.  The primary access is off East 1st Street.  The other access seems to be off 515 on property owned by the Georgia Department of Transportation as part of its 515 easement.  Mr. Parsons has contacted them, but any decision must be made by GDOT.

The final issue raised by readers is that the park will not meet fire safety regulations.  So, FetchYourNews.com contacted the Fannin County Fire Department and spoke with Randy Epperson, Battalion Chief.  Mr. Epperson said that once a commercial structure is completed, only the owner of the structure can contact state inspectors for an inspection.  Actually, Mr. Epperson says, is that what the inspection really is is a safety survey.  The end result is a list of suggestions for increasing fire safety which is given to the owner, and then the owner when or how to comply with the suggestions.  Mr. Epperson says that the parking surface of the adventure park must be asphalt for the Fannin County Fire Department to use the ladder truck for rescue.

So, whether you look forward to zipping over the fetid fumes of 515 or think that the zip-line adventure park is an eyesore of an entrance to Blue Ridge, Blue Ridge Ariel Adventure Park will be here for some time to come.