FANNIN COUNTY, Ga. — The Blue Ridge City Council held four public hearings during their June 21, 2022 meeting. They also gave a certificate of appreciation to Megan McDaniel for her role in the creation of the city’s new logo. 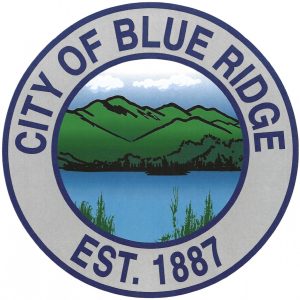 A Fannin High School arts class recently held a contest to design a new logo for the City of Blue Ridge. After selecting a design using input from that contest, further updates were made by the council and a graphic designer. The final logo design was approved by a unanimous vote during a special called meeting on May 26, 2022. During their latest meeting, however, the council recognized an individual for their role in the creation of the new logo. Megan McDaniel received a certificate of appreciation for “creating the best artwork that inspired the new logo for the City of Blue Ridge.” Mayor Rhonda Haight also personally thanked McDaniel, saying, “Your logo will be with us for some time. So, thank you so much.” The city’s website has already been updated with the new logo.

After approving rezonings during a prior meeting, the council also held two public hearings with the purpose of amending the city’s zoning map. The amended map would reflect changes made during a May 17 meeting, where the council approved a rezoning request from the Searles Foundation. The property, changed from General Commercial (C-2) to High Density Residential (R-3), is the planned site for 84 affordable workforce housing units. Two other public hearings addressed amendments to the city’s code that City Administrator Eric Soroka called “house-keeping” to provide clarity in certain provisions.

While there were no actions items on the council’s agenda, the consent agenda included an expenditure of $6,780 for an HVAC System replacement at the Baugh House. The agenda also noted the expense was not budgeted for.