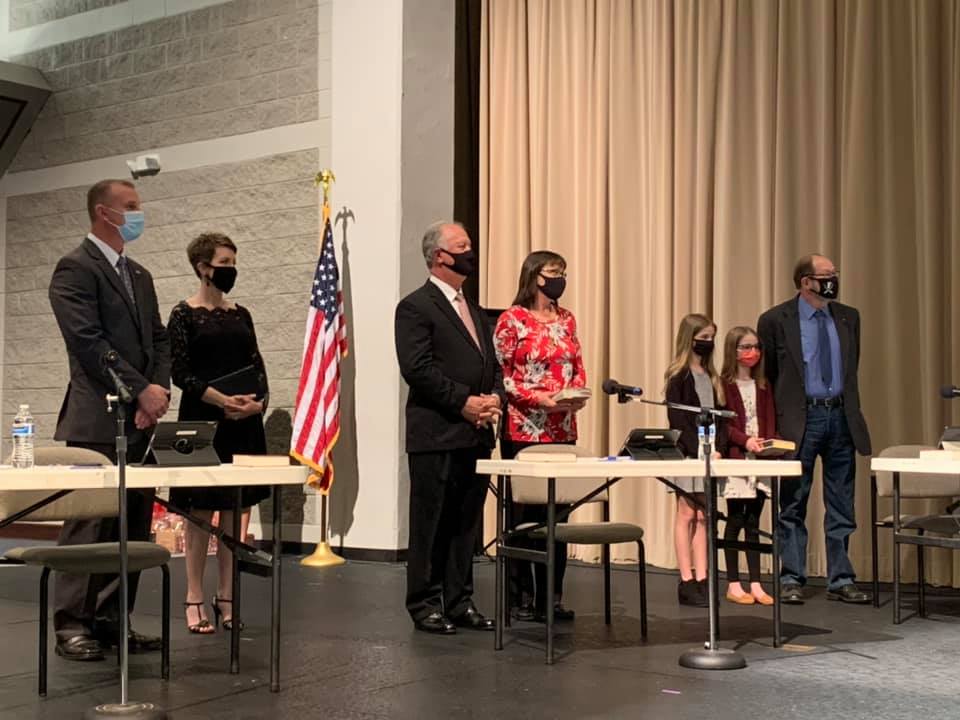 Worcester thanked the school system for inviting him to the night’s meeting.

“I’ve been fortunate to have the opportunity to work with the Fannin County School System for a long time,” Worcester said, “This system has been known for strong leadership, a strong core of teachers, the reputation of being innovative and creative. When I was asked if I would be willing to administer the oath of office to three board members, I was actually very honored to participate in this.”

Family members of the board members held the Bibles used to administer the oath of office.

In Fannin Middle, 267 students participated in a fall sport or band. 152 sport rostered athletes 80 girls and 72 boys and 115 band members.

Volleyball won the mountain league championship. Softball significantly improved saw much from last year and competed finishing in the top half of the league.

As for winter sports, wrestling is “off to a great start.” The seventh grade boys basketball team is undefeated.

Football Team won the region championship and completed a perfect regular season and has advanced to host the third round of the state playoffs.

Volleyball team placed third in area and advanced to the first round of the state playoffs.

A young softball developed as the season progressed. E-sports started recently and will compete through December.

The Girls Basketball team is currently ranked in the top ten.

Assistant Superintendent Darren Danner has been working with the state to obtain funding for school facilities. A state committee approved the plan for the next five years and the board approved it on December 8, 2020.

“Mr. Danner’s done a great job on this,” Superintendent Michael Gwatney stated. “Bottom-line is he is very forward-thinking, and he’s been able to work with the schools and work with his peers in other districts to identify future challenges in his area to secure state funds for us to save local money.”

The school system can potentially receive up to $8 million in state funds. A significant portion of the money will go to HVAC renovations.

Plans are moving forward on Staff Development Center with 90 percent of the architect plans done. The construction manager is finalizing the budget and preparing bid packets to be sent out on December 14. The bid packets will be collected on January 11. The Construction manager expects a GMP by January 21 and pending approval, the breaking of ground could occur in mid-February.

Fannin County School Board school board swearing in