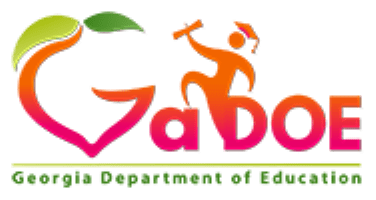 NORTH GEORGIA – During Thursday’s Georgia Department of Education (GaDOE) meeting, the state board of education opted not to discuss a delayed school start of September 8.

For now, school start dates still remain in the hands of local school districts. Many have already pushed back the first day of school for either a couple of days or a week.

First District State Board Member Mike Long expressed his belief that children need to be back in school and to “get the schools open as quickly as possible.”

He also spoke about his concerns that some school systems are not prepared to go back to work. Board members received information that some schools aren’t meeting safety guidelines, such as social distancing or mask mandates.

Long added that no one has any data to properly gauge the situation.

Long spoke at length about the return to school and the need to properly serve Georgia’s children.

Attendance policies were also discussed concerning virtual practices, but exactly how students will be held accountable for attendance remained unclear.

The meeting was supposed to be held via live stream but moved to a call-in webinar. The state board could announce a delayed start during a called meeting.

NORTH GEORGIA – Georgia STEM’s reporting that during tomorrow’s Georgia Department of Education (GaDOE) state board of education meeting, they will consider pushing the school start date back to September 8. This would be a statewide mandate.

STEM added that the measure has the support of Gov. Brian Kemp.

If pushed back, GaDOE will accommodate several districts’ delayed starts, and the Georgia High School Association’s (GHSA) decision to move the start date of football. 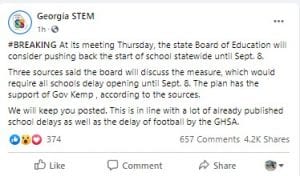 However, GHSA hasn’t yet delayed other fall sports.

The GaDOE state board meeting will take place tomorrow at 10 a.m over a live webcast.

Fetch Your News will update this story as soon as more information becomes available.