City of Blue Ridge officials met opposition to the annexation plan when council members Nathan Fitts and Rhonda Haight questioned the information they had been given by Blue Ridge City Mayor Donna Whitener prior to a vote that sent the appeal for annexation to the State Capitol.

Haight, Fitts and new council member Mike Panter all voiced that more public input was needed before the annexation should take place. A Town Hall meeting was scheduled shortly after to allow citizens to speak either for or against the topic at hand.

The majority of speakers at the meeting were in opposition, most agreeing that growth is inevitable but the way this particular deal was made regarding the annexation was not forthcoming or transparent and should therefore be tabled until more information is available to the public.

“Back up and do it right,” citizen Paul Miguire declared at the town hall.

Residents were still left baffled when the Blue Ridge City Council released their upcoming June 9 (Election Night) meeting agenda. Annexation was not on the agenda to be discussed, even with the looming deadline to either move forward or rescind before State Legislators reconvened their session.

Annexation is not on the agenda for the upcoming meeting because Blue Ridge City Officials have already sent a letter to the Capitol asking that no action be taken on the annexation request for the remainder of 2020, unless voted on by council to renew its original request.

As you may recall, I previously forwarded a resolution passed by the City Council requesting the annexation of certain roads into the City. It is my understanding a House Bill was drafted to comply with that request. However, on May 19, 2020, the City Council voted to respectfully request that you table the previously requested annexation and take no action for the remainder of the 2020 legislative session unless the City renews its previous request. Additionally, the City Council also wishes to rescind its requests relating to the Charter amendments for staggered terms and the ability fill a vacant seat by appointment. I appreciate all you do for the State and am happy to answer any questions. Thank you. 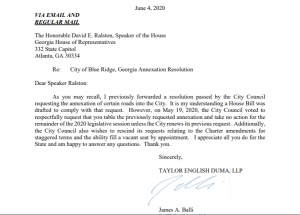