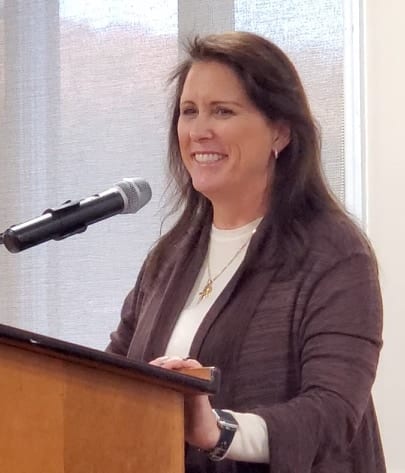 “I am a conservative Republican and I am a pro-Trump supporter,” Strickland said. “I am a true outsider. I am not a politician. I am an American, just like you, who wants to go to Washington and help President Trump drain the swamp.”

Strickland, the sole female candidate to join the race thus far, was met with applause by the Towns County GOP.

“I feel very strong about that,” Strickland continued. “We need to send more people who can make change, and in doing that, we need to stop sending career, establishment politicians. We’ve been doing that and we’re not making any difference. Nothing is changing. Sending someone like me, me in particularly, to Washington, we can do that. We can help President Trump with his policies, and with that, we can bring in term limits, and maybe we can stop these career politicians from staying there for 30, 40 years.”

The Republican candidate attended the “Hats off for Trump” event in Blairsville earlier in the day, sponsored in conjunction with the Union, Towns, and Rabun Republican parties.

“We need to stop the radical left from destroying this country. I am pro-gun, pro-life. I am pro-American,” Strickland emphasized.

The seat was vacated by Representative Doug Collins who announced candidacy for U.S. Senate last month. Collins will run in the late-2020 special election, vying to complete the final two-year term of retiring Senator Johnny Isakson.

Strickland will face the following Congressional contenders on the General Primary ballot, May 19:

Official qualification for candidacy takes place the week of March 2, 2020.