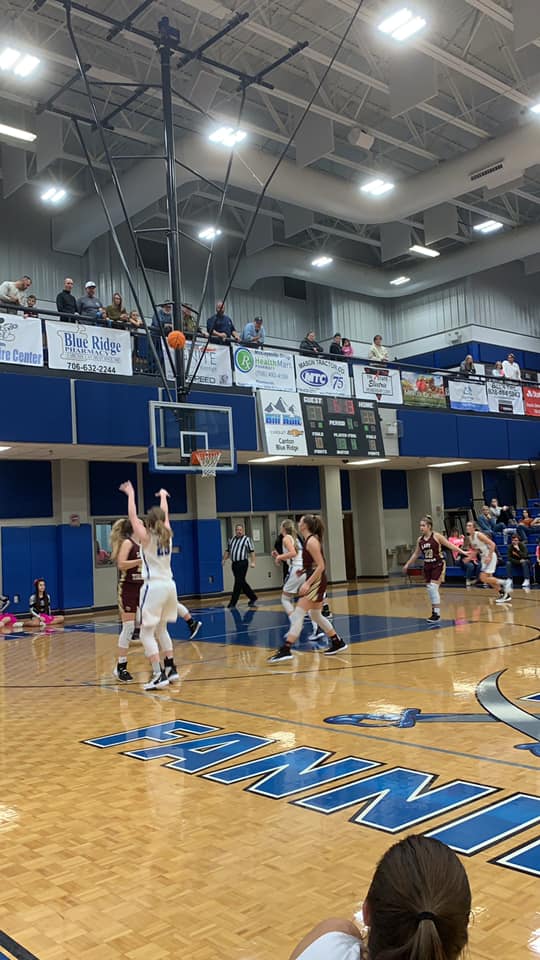 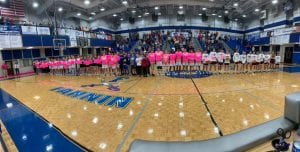 For their second region matchup of the season, the Dawson Lady Tigers (11-6, 5-1 Region 7-AAA) traveled to Fannin County High School to take on the Lady Rebels for their pink out game (12-5, 3-3 Region 7-AAA). Dawson previously beat Fannin and the Rebels hoped to redeem themselves this time around.

Fannin got the ball from tip-off and wasted no time putting it into action. Fannin had great passes up the court to make baskets to add to their score. Morgan Holt showed off her shooting game as she led Fannin in scoring for the night with 19 points overall. The Lady Rebels were playing a great defense as they kept Dawson from scoring until there was only 1:52 left in the first quarter. Right as the buzzer sounded, Holt banked a 3 point shot to put the score at 15-6 with Fannin in the lead.

Reagan York started off the second quarter with a jump shot to extend the Rebels lead. The sophomore showed off her speed as she rushed past the defense and added six points to Fannin’s score. Becca Ledford followed York’s lead as she was able to contribute 10 points of her own. Despite Dawson’s full court press, the Rebel’s were able to break past it and earn more points. Abby Ledford was able to break past the heavy defense and add eight points to Fannin’s score to extend the Rebel’s lead 26-14 to go into halftime. 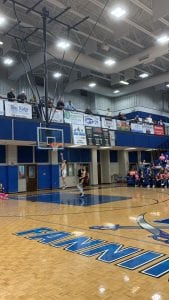 The Lady Tigers came alive to start off the second half. They started to drive to the basket and push back the defense to draw fouls and make free throws. The Rebel’s followed the trend as they added foul shots of their own to the score. Olivia Sisson showed off her moves on the block as she added five points to Fannin’s score, three of them being from made foul shots. Mackenzie Johnson had grit as she followed the trend and made three free throws to add to Fannin’s score. Dawson began to make a comeback as Natalie Thomas made an outside jump shot followed by a free throw, to put the score at 33-29 with Dawson trailing right behind.

Dawson County pulled ahead for the first time in the game as they hit a 3 point shot to put the score at 34-33 which was followed by another to extend the Tiger’s lead 37-33. Holt responded to this as she made a 3 point shot of her own to put the Rebels behind by just one point with a score of 37-36. Johnson was scrappy as she drew a foul and made both of her shots to put Fannin ahead once again. Becca Ledford extended Fannin’s lead as she made a layup to put the score at 40-37. Just as Fannin began to get their lead back, Dawson hit another 3 pointer to tie the game 40-40. The game kept going back and forth until it was tied up 53-53 when Olivia Sisson made a foul shot to put Fannin ahead 54-53. With seven seconds left, Fannin’s defense worked hard and kept the Tigers from scoring for the buzzer to sound on Fannin’s victory.

The Rebel’s win puts their overall record at 13-5 while their region record stands at 4-3. Catch Fannin’s next game tonight at Union County starting at 6pm!