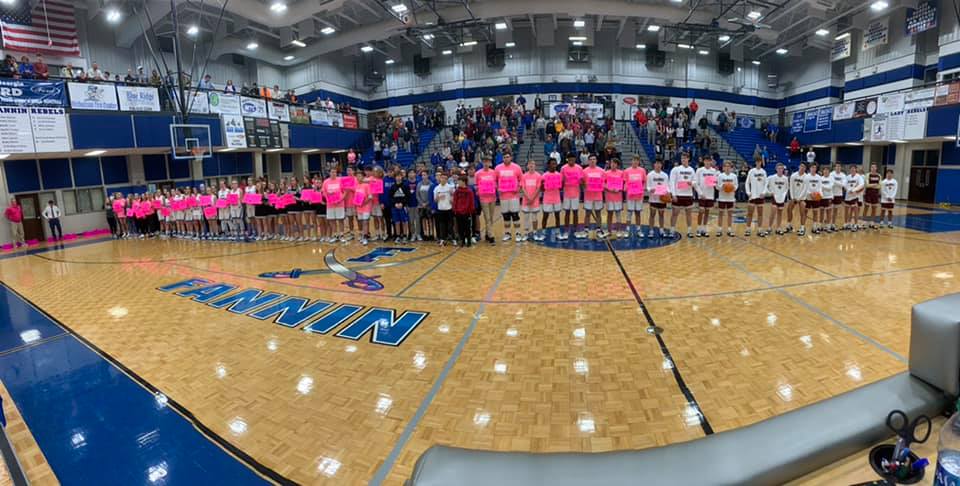 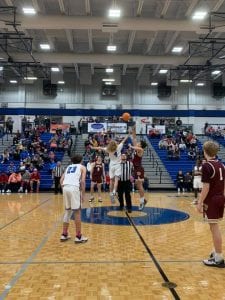 Cohutta Hyde jumping for the ball at tip-off

Last night, the Dawson County Tigers (16-2, 6-0 Region 7-AAA) traveled to Fannin County (5-12, 0-6 Region 7-AAA) to take on the Rebels for their Pink Out game. The Tigers beat Fannin the first time around and the Rebels looked to redeem themselves with a win.

Cohutta Hyde jumped for the ball at tip off where he earned possession for Fannin. Hyde was the one to lead Fannin in scoring for the night as he contributed 16 points overall. As the Tigers started to drive the basket and score points, Fannin was putting up a great defense. Landon Norton was aggressive on defense as he took a charge for the Rebels. Both teams applied heavy defensive pressure and were able to hold the other as Dawson ended the first quarter with a small 10-9 lead.

Fannin kept fighting in the second quarter until they started to get into foul trouble. With the tension being high, the head coach of the Rebel’s basketball team was given a technical foul for unsportsmanlike conduct while multiple other people were asked to leave the game for comments that were made. After Dawson began to drive the basket and make the technical foul shots, they ran away with their lead. Although Fannin was behind, they still fought hard until the end. Jordan Bennett showed off his ball handling skills as he moved past the defense to earn 11 points to add to Fannin’s score and put the score at 48-12 with Dawson in the lead to go into half time. 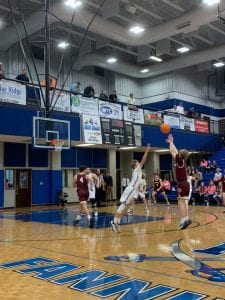 Dawson was on fire with their 3 point shots for the night as they made 16 overall. While the Tigers were racking up points, Fannin was able to score a few 3 pointers of their own. Andre Bivens got after it as he added six points to the Rebels score, with one of the baskets being from a 3 point shot. Eli Brisbay-Cochran continued the trend as he banked a shot from above the key and put the score at 80-26 to end the third quarter.

With the Tigers lead being so big, the fourth quarter was cut down to six minutes. Dawson was making steals left and right and refused to show any mercy. Fannin still hustled up and down the court in hopes of making more baskets. The Rebels had good looks inside to their posts where Dylan Collins earned a basket from the block and Miles Joshnson drew a foul to add a made free throw to Fannin’s score. As time ran out, the buzzer sounded on Dawson’s 90-41 victory against the Rebels.

Fannin’s loss puts their overall record at 5-13 while their region record stands at 0-7. Catch the Rebel’s next game tonight as they travel to Union County to take on the Panthers starting at 7:30pm!