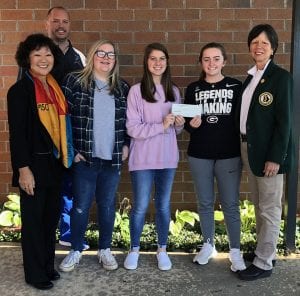 “The purpose of the grant is to assist an organization through funds to develop, promote, maintain and protect the best interests of the game of golf among amateur female golfers throughout the State of Georgia,” according to T.C. Dillard with the high school.

The application to receive the grant was submitted during the spring. The school received word in October that Fannin County had been awarded the grant for the upcoming golf season.

Lady Rebels team members were quick to offer their thanks, led by junior Lainey Panter.

“I want to personally thank the Georgia Women’s Golf Association for their generous donation to our golf team.  I am very grateful to live in such a supportive community that wants to promote women’s golf and supports the success of our student-athletes,” Panter said.

The Lady Rebels golf team has played well in recent years. Last season, they missed qualifying for the state tournament as a team by just a few strokes during the 2018-2019 season.

Panter shot an 85 in the Area 3-AAA tournament last season.

She led the Lady Rebels to a seventh-place finish, just a few shots shy of earning a shot at the team title at the state tournament.

Panter’s 85 did qualify her to move on and compete for the state’s Class AAA individual title.

She fired a 184 during the two-day event, which was held May 20-21 at Arrowhead Pointe Golf Course in Elberton.

Panter’s score was good enough for 17th out of the 53 competitors who qualified and faced off during the state-title event.

The Lady Rebels will tee it up beginning in late winter/early spring of 2020.