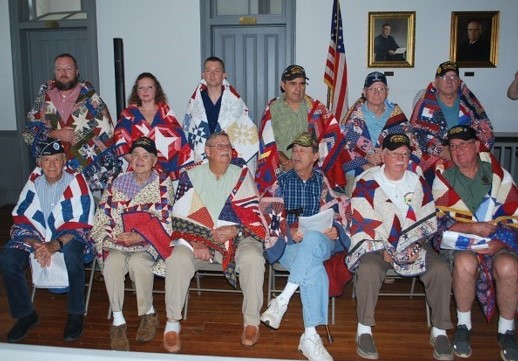 Quilt of Valor quilters from the Misty Mountain Quilters’ Guild in Blairsville, GA were honored to award Quilts of Valor to 10 local veterans who were touched by war on Saturday, August 10, 2019.  The Award Ceremony was held at the Union County Historical Courthouse on the Square in Blairsville, GA, and the ceremony was enhanced by several patriotic songs shared by the Smokie Mountain Melodies singing group.

“Quilts of Valor” is a national grassroots organization comprised of thousands of quilters in every state of the union.  There are now Quilts of Valor groups in all 50 states and overseas, too. Since those first quilts that the founder of QOV, Catherine Roberts, and her friends made, more than 225,000 quilts have been presented to men and women who are combat zone veterans of current and past wars, including many veterans from WW II, Korea, Vietnam, and the wars in Iraq and Afghanistan.

The Misty Mountain QOV Quilters have awarded over 750 Quilts of Valor to local veterans and injured active duty troops in Germany and Afghanistan, and to Veterans Affairs Medical Centers in the US.

If you, or a veteran you know, has been touched by war, and you want to know more about how that veteran can be nominated for a Quilt of Valor, please go online to http://www.qovf.org/ and click on the “Learn How To” dropdown box, and then click on “Request a QOV”.  If you would like to help Misty Mountain Quilters make some of these quilts for our heroic American veterans, please go to the following website:  http://www.mistymountainquiltguild.org/ , clicking on the word “Projects” on the left side of the home page, and then look for the QOV group information.  QOV quilters are honored to make it our mission to salute our veterans.

Bill had his Basic Training – OCS (Officer Candidate School) – in Newport, Rhode Island.  He then went through Communication Officer School. He was assigned to a Destroyer based in San Diego, but which was deployed to the Western Pacific in January 1954.  He served on the USS Wiltsie (DD-716), and the USS Rowan (DD-782) with the rank of Lieutenant of the Navy.

For his honorable service, he was awarded the following Medals: the Korean Service Medal, and the China/UN Korea Service Medal.

After his service in the Navy, William Jennings attended Princeton Seminary, became an ordained minister in the Presbyterian Church.  William married Beverly (Fern) Birtch and they served 37 years as missionaries in Brazil. William went on to get a Masters and a Doctorate in Divinity while serving as a missionary.  William and Fern, married for 59 years, have three sons and an adopted daughter: William H. Jennings IV, Timothy Jennings, Andre Jennings and Gloria Turcinovic. William and Fern have 11 grandchildren. 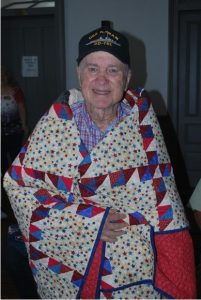 Paul joined the Navy Reserves at the age of 17 in 1963, and then went on Active Duty with the Navy in January of 1965.  He was stationed first in Virginia, then to Camp Pendleton, California, and from there went to Vietnam, and he served with the U.S. Marines as a Corpsman there.  He remained on active duty after he returned home from 1967 until he was discharged.

For his honorable service, Paul was awarded the following medals and ribbons:  The National Defense Service Medal, the Republic of Vietnam Service Medal with Fleet Marine Force Combat Operations Insignia, the Vietnam Campaign Medal with Device, and a Presidential Unit Citation.

Paul and Sharon got married on December 20, 1966, they have 4 sons, 9 grandchildren and 3 great grandchildren. Paul has been very active in our lives. He helps with projects around the home and in the church.  He has lived in Cobleskill NY, Dunnellon FL, and part time in Ellijay, GA. He enjoys working with his hands, so building and gardening are two of his favorite things. 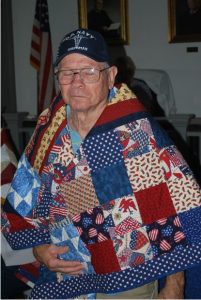 Peter went through Basic Training at Fort Dix, NJ, and then had Advanced Infantry Training at Fort Sill, OK.  He spent from 1970 to 71 in Vietnam as a Specialist 4th Class and was in the Army for a total of 2 years.

For his Honorable Service, Peter was awarded the following medals: The National Defense Service Medal; the Vietnam Service Medal with 2 bronze stars; the Republic of Vietnam Campaign Medal; a Rifle Sharpshooter medal; and an Aircraft Crewman Badge.

After discharge, Peter worked in the family construction business and the gold mining business for 20 years.   He is married and has one son. He moved here from Florida and has lived in Ellijay for the last 4 years. 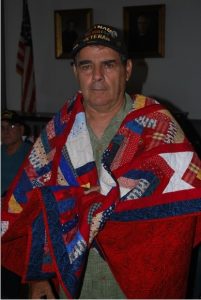