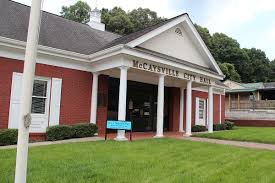 MCCAYSVILLE, Ga. – Lots of new things are happening in downtown McCaysville these days. With the grand opening of Riverwalk Shops, the area is bustling with activity and beautification.
McCaysville Revitalization Committee Chairman Zachary Welch visited with City Council members on Tuesday, May 14, 2019, to update them on the recent upgrades to the project as well as express interest in possible future projects to be considered by the council.

Concerning some completed and on-going projects, Welch stated there is a “passion to make (the downtown area) appealing as best as it can be.” He noted there were three donated planter boxes which were refurbished and placed in front of the People’s Bank of East Tennessee and at the Welcome Center.

He further added 17 new hanging baskets were beautifully displayed throughout the city on decorative street posts, two on the sidewalk leading to the Welcome Center and five baskets are located on the Highway 60 side of town.

A new sidewalk extension has been put in place next to the Welcome Center and extending to the current city park. This project was approved for completion at a recent council meeting.
Welch continued to share the good news about the existing city park area. Recently, trees between the old and new parks had been removed to make room for much-needed parking spaces. Rotten wood on the old picnic benches and tables are being replaced with cedar wood. New flower planters are being placed will be an added and featured on this portion of the beautification project. A new flower planter at City Hall was placed next to the drive-in window. A newly donated bench is now seen in front of the McCaysville Police Department.

Welch asked the council to consider his suggestion of placing “two to three paperbark maple trees, up to three decorative street lights, and three park benches with a matching trash container on the new sidewalk area leading to the existing city park.”

The council took under advisement vendor applications and fees for upcoming events. City Attorney Curtney Stewart said she would prepare a city ordinance to reflect the application process and fees. Stewart added the council would address this issue at a Special Called meeting.

The next McCaysville City Council meeting will be held on Tuesday, June 11, 2019, at City Hall.