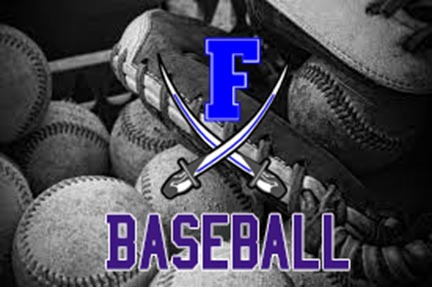 In game 2 of 3 and the first of a doubleheader at Fannin on Friday, the Rebels banged out a 10 hit performance led by Chandler Kendall.  With a win, the Rebels were guaranteed to win the series heading into game 3 for the sweep.

Coming in as the visiting team, the Indians of Lumpkin County stepped to the plate first pushed their only run of the game across the dish on a ground ball error by the Rebels.  Taking the mound for Fannin, Beavers had seen enough and put his focus on shutting his opponent down almost single handily in putting the game on his back.  Beavers threw 116 pitches(112 being GHSA rule with allowance for completing the at-bat) with 74 being in the strike zone.  He allowed just the one unearned run on one hit, 5 walks and 12 big strikeouts in the 8-1 victory over the Indians.

Several Rebels had a very good game at the plate with 3 Fannin batters collecting 2 or more hits.  Chandler Kendall led all players that stepped to the plate going 3 for 4 with 4 RBI and a run scored.  Following close behind was G. Buchannon who was 2 for 3, 1 RBI and 1 run scored., Roger was 2-5 with a run scored.  Norton, Pack, and Holloway added singles for the Rebels.  he 8 runs from Fannin came in the 1st, 2nd, and the 6th giving them the 2 games to none lead in the 3 game region series. 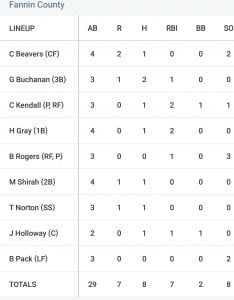