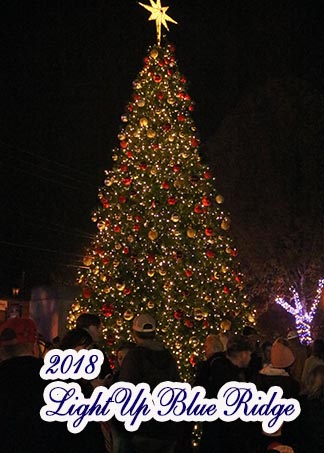 Mother Nature was very thoughtful and gave a beautiful day to the City of Blue Ridge on Saturday as the community and beyond came together for the lighting of the Christmas tree.  The annual event, co-sponsored by the city and the Blue Ridge Bussiness Association has all one could ask for from food vendors and local restaurants to craft vendors and local shopping. 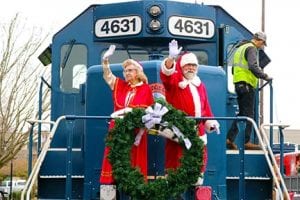 To kickstart the day’s festivities the Blue Ridge Scenic Railroad gets their names on the nice list and gave the season’s favor big guy a free ride.  As children of all ages gathered at the depot the sounds of the train whistle echoed throughout the downtown area.  Right on schedule Engine 4631 pulled in to the station carrying Santa Claus and his beautiful wife(Mrs. Claus).  Santa gave a few waves to the crowd and let out the words we all love to hear him say…”  Ho Ho Ho…MERRY CHRISTMAS”  This wasn’t the end of his day in the town of Blue Ridge.  Santa stayed aboard to be the special guest on the Santa Express.  The Scenic Rail

Road ran special trips lasting about an hour.  These trips allowed passengers to experience stories from elves, a dancing Christmas tree, and Rudolph the Rednosed Reindeer all while getting photographs to capture memories.  Making a surprise appearance on the train, the GRINCH thankfully wasn’t in the mood to steal Christmas this year.  As one little one said, ” The Grinch had his good heart today and it is red.” She went on to say ”  When he is mean, he has a green heart which is bad.”

As the daylight started to dim, the sidewalks filled with young and old.  The excitement filled the air as the preparation began for the annual parade.  As the blue lights came closer the parade officially started with the procession of beauty queens, emergency vehicles, and community yielding all the festive costumes that all come to expect as part of a holiday season parade. The participants of Saturday’s event included the Boy Scouts of Pack 31, Girls Scouts from Fannin and Copper Basin, the local churches, and community businesses.  Catching the eyes of the older parade attendees would have to be the antique vehicles. 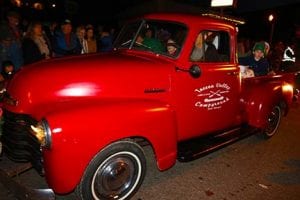 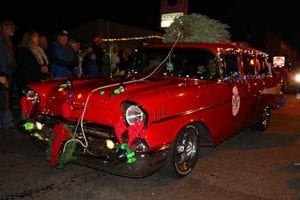 As the parade ended the crowd quickly transitioned to the area around the 28 feet tall tree to be lit at 7:00.  Up until the main en event, music filled the night air as families danced and sang along with their favorite Christmas 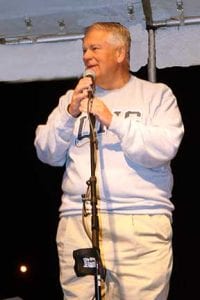 classics.  As the time grew near, House Speaker for the State of GA, David Ralston stepped to the microphone to welcome everyone and introduce Reverend Chan Mitchell of Ridge Community Church for the Invocation.  Everyone had the pleasure of seeing several pageant winners who introduced themselves with the last being a former Miss Georgia and the 2016 Miss America recipient Betty Cantrell.  Cantrell is only the second Miss Georgia in the state’s history to be crowned at the National pageant.  The last was back in the late 1950s’.  Cantrell sang an acapella version of Oh Holy Night and then turned the microphone over to Donna Whitener(See video below).  The Mayor of Blue Ridge let everyone that they needed to be loud so that the man on the switch could hear and light the beautiful tree.  As the count hit zero, the crowd applauded with the lights all aglow to officially start the 2018 Christmas season in the little mountain town of Blue Ridge, GA.