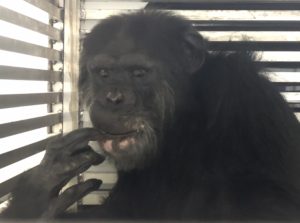 Morganton, GA (November 8, 2018) – Alex spent his adolescent years confined in a small, metal cage with no room to roam. Now, after 34 years in multiple medical research laboratories, the former research chimpanzee will have six acres of forest to explore as the newest resident of the Project Chimps sanctuary.

Thanks to a cooperative agreement with the University of Louisiana’s New Iberia Research Center (NIRC), Alex and nine other chimpanzees were transferred yesterday to their permanent sanctuary home in the Blue Ridge Mountains of north Georgia.

While not every detail of his life in research is known, information from published studies show that Alex spent much of his adolescence at The Laboratory for Experimental Medicine and Surgery in Primates (LEMSIP) in New York. At one point in its history, LEMSIP housed over 300 chimpanzees and nearly 300 monkeys. These 600 primates were subjected to intensive biomedical research in areas including reproduction, blood transfusions, hepatitis B and HIV.

At LEMSIP, the chimpanzees were housed individually in small, steel cages that were suspended above the floor. The chimps were only taken out of their hanging cages to be used in experiments. Enrichment activities were non-existent. Socialization was limited by the distance of the other cages and there was no outdoor area where the chimpanzees could roam.

In 1995, LEMSIP announced that it would close and transfer all its primates to the Coulston Foundation, a laboratory in New Mexico where a variety of research was conducted including toxicology testing. This decision was made with full knowledge that the USDA had filed formal charges against Coulston for the negligent deaths of chimpanzees and monkeys. It is highly likely that Alex was one of those chimpanzees.

Between 1995 and 1997, LEMSIP’s veterinarian, Dr. Jim Mahoney, managed to place 109 chimpanzees and 100 monkeys in sanctuaries throughout North America. Mahoney would later become known as the “Oskar Schindler of laboratory primates,” for his efforts to secretly relocate primates to sanctuary.

Alex, who was only 11 years old when LEMSIP announced it was closing, would spend another 23 years being used in research. We don’t know all of the details, but his serial number tattoo appears in a hepatitis C study that occurred when he was only 12 years of age.

Alex’s use in medical research ended at NIRC in 2015 and as if given a gift, he was prepared for transfer to Project Chimps on the day of his 34th birthday.

Alex made the 12-hour journey from New Iberia, Louisiana, to Morganton, Georgia, in a special transport trailer made possible by funding from the American Anti-Vivisection Society and the Animal Legal Defense Fund. He traveled with nine other former research chimpanzees including five females, Chloe, 14; Betty, 15; Harriett, 15; Lucky, 15; and Panielle, 17; and four other males, Collin, 16; Jermaine, 28; Kareem, 29; and Ronald, 30.

Alex will live the remainder of his life with the opportunity to climb trees in a forest, forage under an open sky and, eventually, choose his own friends.

At 34, Alex is the oldest chimpanzee now in residence at Project Chimps. According to Project Chimps’ executive director, Ali Crumpacker, more than 150 are still waiting their turn to come.

Project Chimps is entirely privately funded and is working to raise funds to build the additional indoor/outdoor habitats needed to accommodate the chimpanzees remaining at NIRC.

According to Crumpacker, her team is nearing the completion of the sanctuary’s first phase, constructing the last of five indoor/outdoor chimpanzee group homes that surround a forested, six-acre, outdoor habitat. When complete, Phase One will accommodate approximately 80 chimpanzees. Site preparation is underway for Phase Two, which will progressively accommodate another 150 chimpanzees within three additional habitats.

Crumpacker is also raising funds for the chimpanzees’ ongoing care and feeding, which costs approximately $22,000 per year per chimp.

“We are grateful for the private donations that enabled us to give Alex the birthday gift of freedom after such a long wait,” said Crumpacker, adding, “I look forward to the day when we can give this same gift to the other deserving chimps still waiting in lab.”

Project Chimps is a sanctuary and therefore not open to the public except for limited engagements. The next opportunity for members of the public to visit the sanctuary will be May 2019 when Project Chimps hosts its bi-annual “Discovery Days” event, which includes educational activities and ticketed tours of the sanctuary. More information is available at projectchimps.org.

Project Chimps is the newest chimpanzee sanctuary in the United States and was founded to provide lifetime exemplary care to more than 200 former research chimpanzees at its sanctuary on 236 acres of forested land in the Blue Ridge Mountains of North Georgia. Project Chimps is a program supported by The Humane Society of the United States, and is accredited by the Better Business Bureau and the Global Federation of Animal Sanctuaries (GFAS). The sanctuary has achieved Guidestar Platinum status and is a member of the North American Primate Sanctuary Alliance (NAPSA).