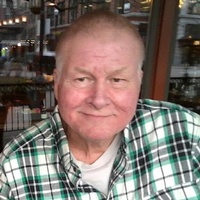 Gary was born and raised in Atlanta, GA, attended Murphy High in Atlanta and graduated from East Atlanta High. After retiring from Northwest Airlines, Gary followed his passion of tinkering with outboard motors – and became a marine mechanic. After several years in the Tampa Bay sunshine, Gary and his wife Tamara, moved to Morganton in 2010. At 64, he attended North Georgia Tech in Blairsville, GA, earning his culinary degree! Gary enjoyed grilling and cooking for friends and family. Best grits, ever!

Memorial services will be conducted on Saturday, August 11, 2018 at 2:00 p.m. from the Akins Funeral Home Chapel. Remembrances will be provided by Larry McDonald, Danielle Carter and Min. Timothy Word. The family will receive friends at the funeral home prior to the service on Saturday from 1:00 p.m. until 2:00 p.m. Flowers will be accepted, however memorial contributions may be made in Gary’s memory to the American Lung Association at www.lung.org, the Pulmonary Fibrosis Foundation at www.pulmonaryfibrosis.org or to the charity of your choice. Condolences may be sent to the family online at www.akinsfuneralhome.com. Akins Funeral Home of Blue Ridge, GA is in charge of the arrangements.