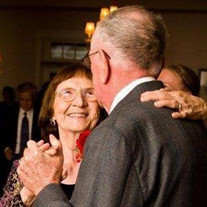 Mrs. Irene Marie Turgeon, age 89 of Blue Ridge, passed away Thursday, July 26, 2018 at the Blue Ridge Assisted Living. Mrs. Turgeon was born March 8, 1929 in Saint Paul, Minnesota to the late Alois Simmer and the late Marie Simmer. Irene was a member of St. Anthony Catholic Church and rejoiced in Jesus Christ as her Savior. She was preceded in death by her parents, one son, Tom Turgeon, and four brothers, Clement, Will, Leo, and Gene Simmer. Irene was a gifted artist and musician.