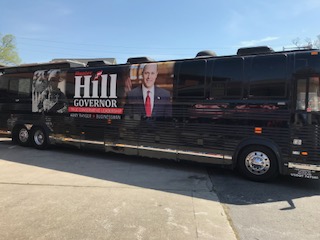 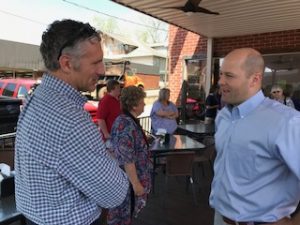 About 30 people greeted Hill when his “Battle-Tested Leadership Bus Tour” RV pulled in at Smokin’ Gold BBQ on Main Street. Hill took time to greet everyone individually and answer their questions before making a brief speech.

Considered one of Georgia’s most conservative lawmakers during his five years in the state senate, Hill said he decided to run for governor when he realized “there is so much more we can do to move the conservative agenda forward in Georgia.”

Hill told the crowd that his vision for Georgia included eliminating the state income tax, ending sanctuary cities, limiting the size of government, passing a religious freedom act and empowering parents to have more choice when it comes to the education of their children.

In addition to Hill and Cagle, the other Republicans running for governor are Secretary of State Brian Kemp, State Senator Michael Williams and former Navy SEAL Clay Tippins.

Deal visited Clarkesville Wednesday morning where he said winning the race for governor without a runoff would be mathematically impossible.

Asked to respond, Hill said, “Sixty-five percent of the folks are looking for an alternative to (Cagle). Casey is weak because Casey is a career politician. People are tired of the status quo and career politicians who talk like Ronald Reagan but govern like Barack Obama.”

A graduate of West Point, Hill served three tours on active duty in Afghanistan and Iraq and received two Army Commendation Medals, the Meritorious Service Medal and the Bronze Star.

During the most recent reporting cycle, Cagle had raised about $4 million followed by Kemp with $2.9 million and Hill with $2.7 million.

“I remain convinced that it’s not all about money,” Hill said. “It’s about getting your message out. Our message is a true conservative vision for Georgia. We don’t have to have as much money as the political class, the establishment and the career politicians. We’ve already been outspent 3 to 1 by the other candidates and here we are in a strong second and closing the gap on Cagle.”

Fetch Your News is a hyper local news outlet that covers Dawson, Lumpkin, White, Fannin, Gilmer, Pickens, Union, Towns and Murray counties as well as Cherokee County in N.C. FYN attracts 300,000+ page views per month, 3.5 million impressions per month and approximately 15,000 viewers per week on FYNTV.com and up to 60,000 Facebook page reach.If you would like to follow up-to-date local events in any of those counties, please visit us at FetchYourNews.com