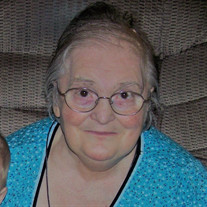 Mrs. Martha Florence Stonecipher, age 74 of McCaysville, passed away Tuesday, April 24, 2018 at her home. Mrs. Stonecipher was born May 29, 1943 in Turtletown, TN to the late Frank England and the late Mary Nicholson England. A member of Mine City Baptist Church, she was preceded in death by her parents and husband, Vaughn Stonecipher, also, grandson, Nicholas Stonecipher and great-grandson, Clint O’Laughlin. In her spare time, Martha enjoyed reading and visiting with her grandchildren and great-grandchildren.

A graveside service will be held Friday, April 27, 2018 at 1:00 pm at the Turtletown Baptist Church Cemetery.