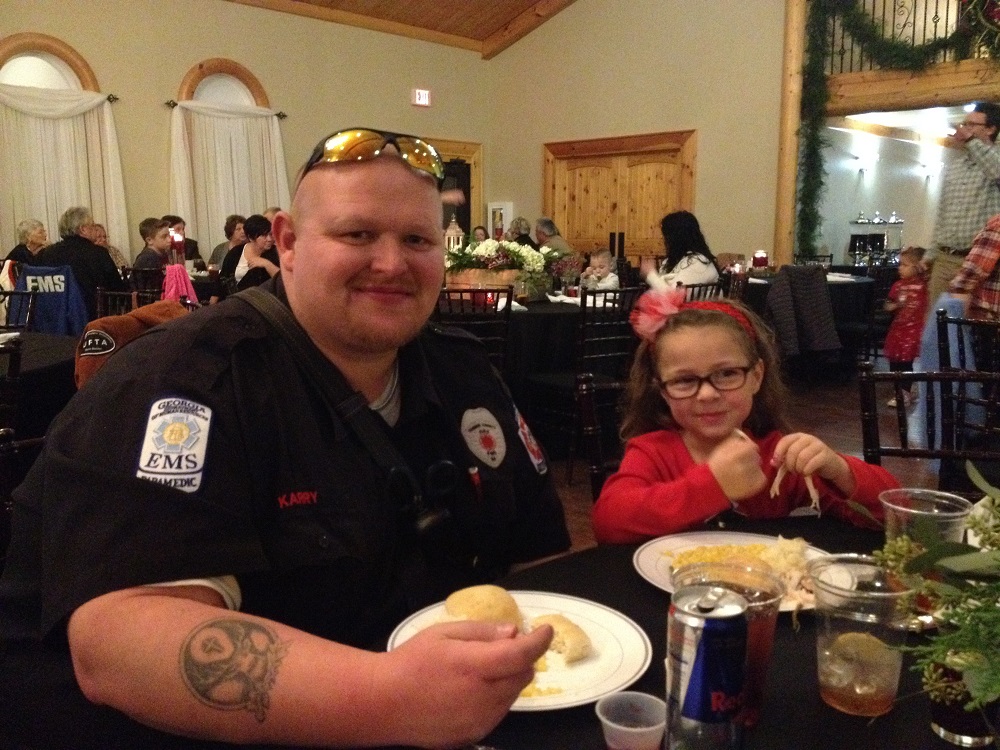 Following a festive holiday dinner complete with turkey, ham and all the trimmings enjoyed by a large number of firefighters and emergency personnel along with their families, Fannin County EMA Director Robert Graham and Fire and Rescue Chief Larry Thomas presented the yearly awards to honor personnel as nominated by their peers.

“I want to say thank you to everyone whose made this department something really special,” Graham said just before presenting the awards.

Spencer Kitchens was announced by Graham as the Emergency Medical Technician (EMT) of the Year. Graham spoke highly of Kitchens and Kitchens’ constant willingness to improvise in difficult situations. Kitchens was not able to attend the banquet Thursday.

Next, Graham presented the award of David W. Curtis Memorial Paramedic of the Year to Bobby Long. “(Long) is a big asset to anyone going through paramedic school as he is a wealth of knowledge, which he is always eager to share,” Graham said of Long. 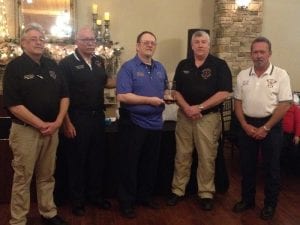 Chief Thomas presented the FCFD Rookie of the Year award to Tim Grant. “He does a lot. He does a lot that is unseen out there, too,” Thomas stated of Grant, adding he suspected the award might come as a surprise to Grant. 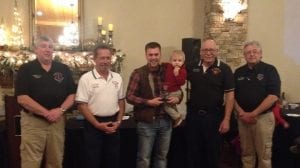 Channing Johnstone was awarded FCFD Firefighter of the Year by Thomas, who stated, “(Johnstone’s) traveled that long hard road. He’s stood up (and) he’s done – what I feel like, as chief of the department – that he should be doing, right now.” 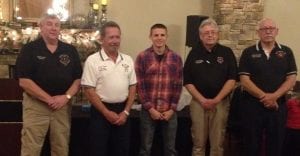 For Volunteer of the Year, Chief Thomas had the privilege of presenting his son, Josh Thomas, with the award and jokingly reminded everyone that the award nominations came directly from the personnel and not the officers. 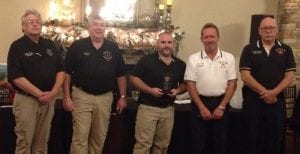 The Lawrence Waters Rescue Award went to Jason Turner by Chief Thomas for his unwavering commitment to duty and leadership. 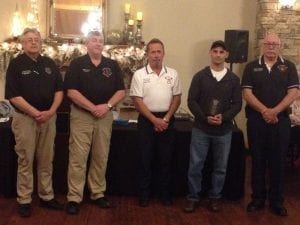 Darrin Conner, who also was not present to receive the award, was honored with the Communications Officer of the Year award.

“I really wish I could give every one of you a trophy (or) a plaque … I’m seeing the generations come up from underneath as chief of the department, and it’s really making me proud,” Thomas said near the end of the awards ceremony. “I’m (hearing) a lot coming from other counties. They’re talking about us, and it’s not bad – let me tell you – it’s not bad. The other chiefs that I meet with at these conventions, they say, ‘Chief, how do you do it? How do you maintain what you’ve got?’ It’s hard, we all pull together and we’re like one big happy family … We’re brothers and sisters in this, and we know how to pull together.” 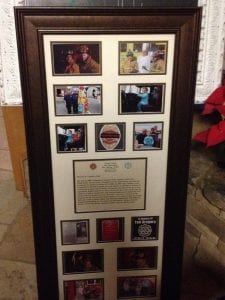 A framed memorial to Howard R. (Ted) Gregory will hang at Station 14.

An emotional moment came at the end of the evening when Thomas unveiled a large framed collage of photos honoring the memory of the late Fannin County Fire Department Captain, Howard R. (Ted) Gregory. Gregory, Thomas explained, joined FCFD in 2000 and served as captain of Station 10 starting in 2004 and later at Station 14 beginning in 2007. Gregory passed away in 2012 after suffering a heart attack, and Thomas stated he has wanted to do something for the past five years to honor Gregory’s memory. The collage features photos of Gregory during his time spent with FCFD along with his badge and a heartfelt tribute written to commemorate Gregory’s service.

“I wanted everyone to know how much Ted Gregory meant to me,” Thomas said, choking back tears.

The framed tribute to Gregory will hang at Station 14 where the captain served.

Chief Thomas ended by saying, “I feel blessed to be here and blessed to tell these stories about this fire department.”