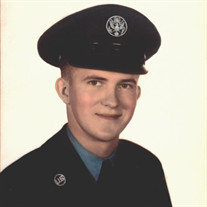 He was preceded in death by sister and brother-in-law, Christine and C. Lloyd Smith.

He was a member of Bethel United Methodist Church and a US Air Force Veteran serving during the Korean War in France and England as an aircraft mechanic. Mr. Cobb was a Past Master of Ocoee Masonic Lodge # 201 F&AM; had served as coroner of Fannin County for eight years, and was a charter member of the Fannin County Civil Defense Squad. Wilson was an expert storyteller who never met a stranger and enjoyed spending time talking with people. He liked spending time on his tractor and spoiling on his grandchildren. Wilson had worked as a school bus driver,
heavy equipment operator, Printer and publisher of the Fannin County Times News Paper. He and his wife LaVerne owned and operated Sword Printing in Blue Ridge.

The family will receive friends at the Henry Cochran Funeral Home Monday, Evening 4 till 8 PM.
Flowers are being accepted but for those wanting to make memorial contributions donations can be made to the Ocoee Masonic Lodge # 201 F&AM P.O. Box 702 Morganton, Ga. 30560 or Hemptown Cemetery Fund c/o Damon Davenport 10623 old highway 76 Morgantown, Ga.
Arrangements entrusted to the Henry-Cochran Funeral Home of Blue Ridge, GA. You may send condolences to the family and sign the guest register at www.cochranfuneralhomes.com