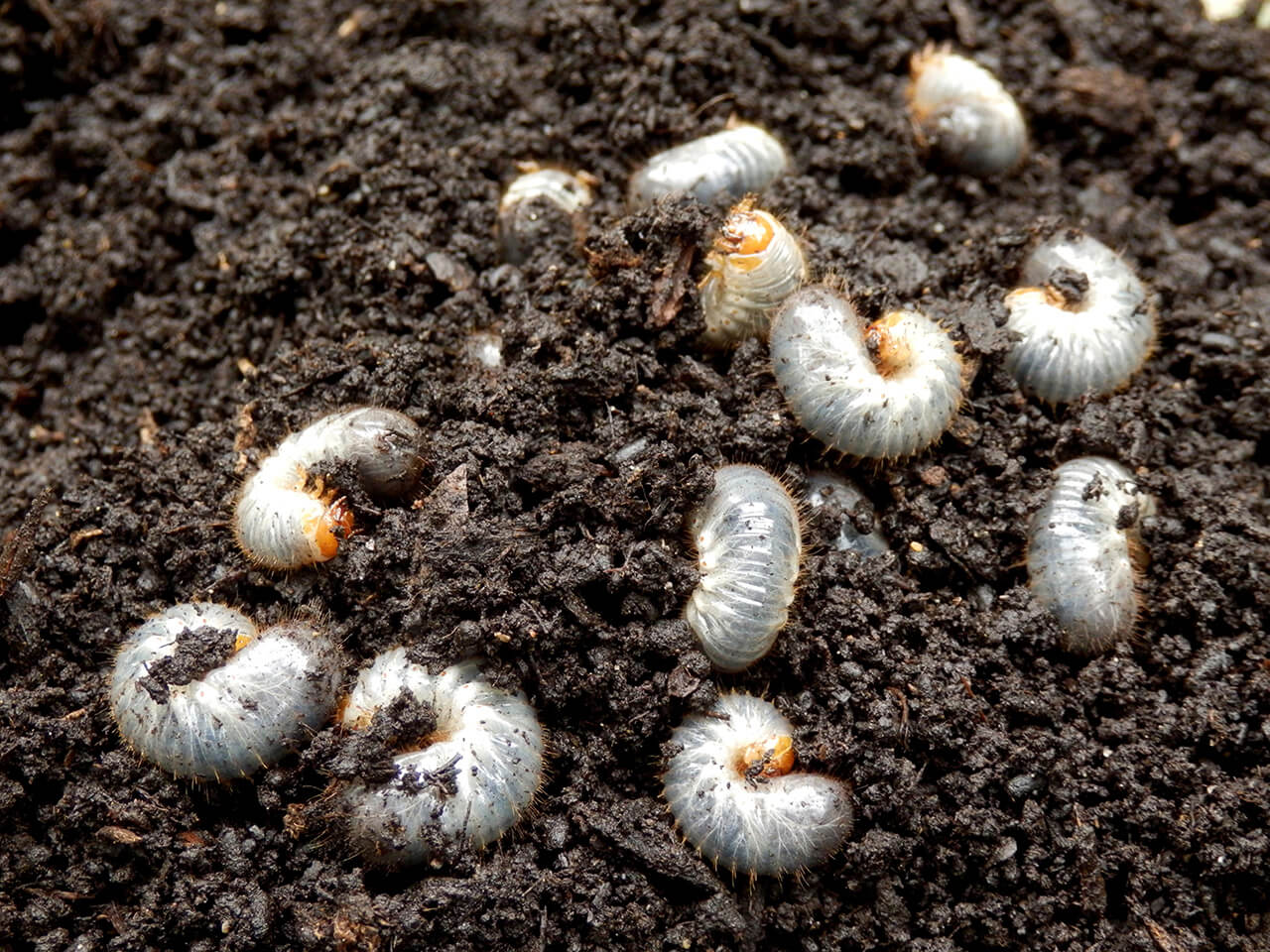 Grubs in the Ground

With the seasons beginning to change, check for grubs and treat them now. White grubs live in the soil and feed on the roots of turf. Most white grubs have a one year life cycle in Georgia. Adult beetles lay eggs in late spring or early summer. The eggs hatch into grubs which feed and grow through the summer and fall, then dig down to spend the winter deep in the soil. They become active as the soil warms in the spring, and feed for a few days to a few weeks, depending on the species. Then they turn into pupae before emerging as adult beetles to continue the cycle.

White grubs are the immature stage of Scarab beetles like green June beetles, Japanese beetles, chafers and others. The scarabs are a large family of beetles, and there are perhaps two dozen different species of white grub that might be found feeding on the roots of turf in Georgia. White grubs damage turf by feeding on the roots during the summer and fall and, to a lesser extent, in the spring before pupation. Very dry conditions can reduce survival of both eggs and small grubs, but many will still survive and emerge as adults the following year.  If you had adults feeding on plants this year it will probably be worse next year.  Because of the dry fall we had in 2016 the numbers may have been down in 2017, but the ones that did survive laid eggs for next year.  With the moisture we have had so far this year, it means that more eggs and grubs will survive and thrive next year.

Symptoms of white grub damage are similar to other factors that damage the root system such as disease, soil compaction, poor fertility, or drought. Grubs never come to the surface until they become adults except for the green June beetle which occasionally travels to the surface. The only way to tell if a lawn is infested is to dig the grubs up. To scout for white grubs, cut 3 sides of a square of turf and lay the grass back like a carpet. Dig gently in the soil to a depth of 4 inches and count the grubs you see. It is important to identify the grubs before you treat. The potential for turf damage is dependent on the number and types of white grubs present.

It is easiest to find white grubs in early spring and late summer (late August/early September) when they are larger and easy to see, however, that is not the best time to treat. Treatments are more effective if applied while grubs are small. In most of Georgia, this means application in June or July for best control, but treatment is still effective in the fall in our area.  Once white grubs get bigger, higher pesticide rates will be required. Good soil moisture and watering in the pesticide is also important for white grub control.

Labeled active ingredient insecticides for grub control include the chemicals trichlorfon, imidacloprid, carbarlyl, halofenozide, and dinotefuran which can be found under various brand names.  Also remember to read the label and follow directions any time you apply pesticides.  Treating grubs now will also help reduce the number of adults that emerge and eat crops, flowers, and plants next year.

For more information, contact me at the Gilmer County UGA Extension office.