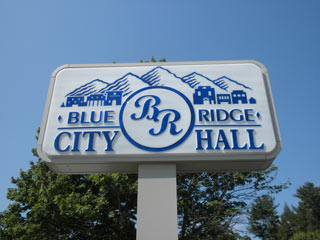 BKP reacts to the latest breaking news on the selectivity of the investigations regarding residency requirements in Blue Ridge. To read our official report on this breaking story click here.

There is a letter to Barbie Gerald from Frank Moore, who represents Cindy Trimble. The letter suggests that Mr. C David Stuart may not be qualified to run for BR City Council, his place of residence is not the commercial body shop he owns. Also mentioned in the letter, N Brendan Doyle, owner of The Boro Pub. Doyle stated under oath that his residence is 150 W Main St., which is the Boro Pub.

Moore attached pictures of the properties and tax records of the zoning. There is only a certain amount of time to challenge it. However, recent precedent suggests Barbie Gerald must investigate.

Obviously there was some picking and choosing going on. Who talked these people into running? Maybe it was Johnny Searcy or Angie Arp? After all, Angie Arp does own the land surrounding The Boro. She was seen on multiple occasions going in and out of The Boro. Maybe she was the one who convinced him to run?

It seems to me that one candidate stood out. One candidate that didn’t fit the mold that Angie Arp, Barbie Gerald, and others wanted.

A judge will be the one to decide whether or not Jane Whaley can run for office. Yet, there are still many questions to ask of Ms. Gerald.

Only time will tell…