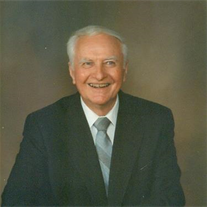 James Adam Davenport, 93, passed away, Thursday, March 23, 2017 at his residence surrounded by his loving family. He was born September 29, 1923 in Fannin County, GA, a son of the late Herman and Minnie Lee Daves Davenport.

He was also predeceased by one sister and three brothers.

James was a faithful church member, deacon and Sunday school teacher at Foreman Memorial Baptist Church in New Ellenton, SC. He retired with US Department of Energy at Savannah River Plant, Aiken, SC in 1985. James was a US Army Veteran, serving during WWII. He was an avid farmer and in his spare time he enjoyed gardening and traveling. He was a member of the Masonic Lodge in Aiken, SC. James and his wife moved to Conway to be near his family and became members of Langston Baptist Church. James will be missed by all who knew him.

A graveside service will be held Wednesday, March 29, 2017 at 11:00 A.M. at the Hemptown Baptist Church Cemetery with Military Honors provided by the North Georgia Honor Guard.

The family will receive friends Tuesday evening at the Henry-Cochran Funeral Home from 6-8 pm.