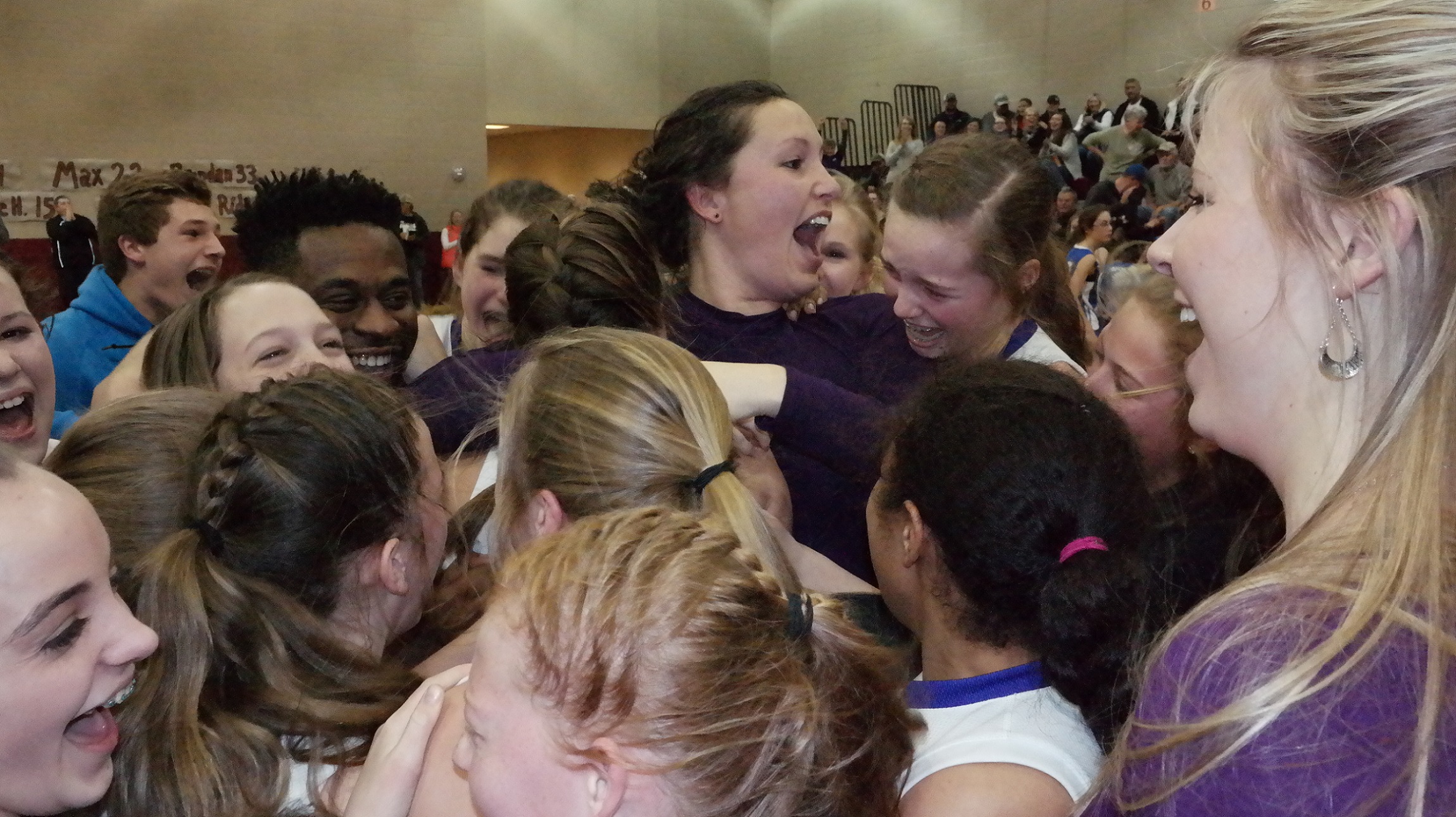 Two improbable moments, seemingly straight from a Hollywood script … and both came in the same game. 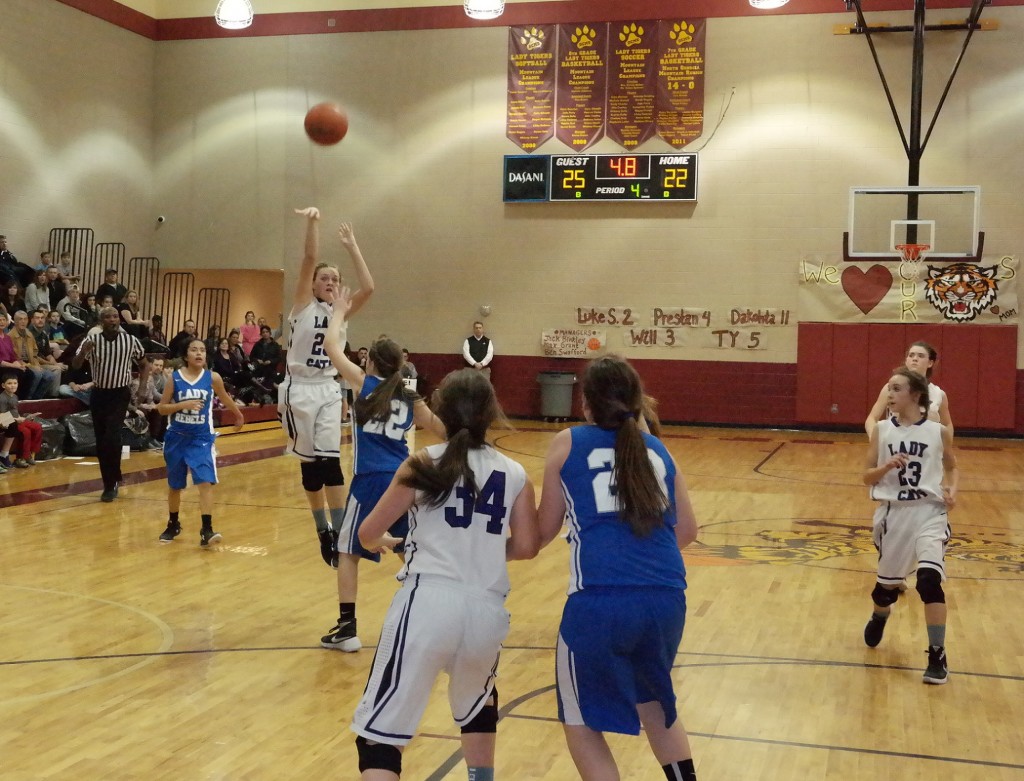 The seventh-grade girls game built to its dramatic conclusion from the outset. Fannin seized an early first-quarter lead, before a Natalie Thomas three-point play put the Lady Cats in a 5-5 deadlock with the Lady Rebels. The first period went on to end in a 7-7 stalemate. FCMS tied the game 13-13 just before halftime, before Emma Callihan gave CCMS a 15-13 halftime lead with a two-point bucket at the buzzer.

Almost like the calm before the storm, the third quarter proved to be difficult for both Fannin and Clear Creek. MacKenzie Johnson provided the lone Lady Rebels basket, while Emma Deyton scored off a steal to keep the Lady Cats lead at 17-15 by the end of the third.

The game continued its back-and-forth theme in the fourth quarter. A three-point play from Olivia Sisson put Fannin ahead 21-19 with 1:08 left in regulation. The Lady Rebels added two more baskets to open up a late 25-22 advantage and were poised to win the championship. However, Emma Callihan had other plans for the Lady Cats, as she caught an in-bound pass with less than 10 seconds left in the game, drove down the court and launched a three-point shot that tied the game 25-25 and forced an overtime.

Fannin refused to go down without a fight. Buckets from Paige Foresman and Abby Ledford, mixed with two free throws from Johnson, put the Lady Rebels out front 32-29. But although Emma Callihan went down in overtime with a sprained ankle, her younger sibling Elly stepped up for the crescendo.

The situation mirrored that of the end of regulation, with a different Callihan in control of the ball. Elly  trotted two steps past half-court and propelled the basketball from well beyond the three-point line. The heave shockingly swished through the net as the buzzer sounded, sending the Clear Creek faithful into a frenzy and giving the Lady Cats the 32-31 win and the 2015-16 North Georgia Mountain League seventh-grade girls championship. 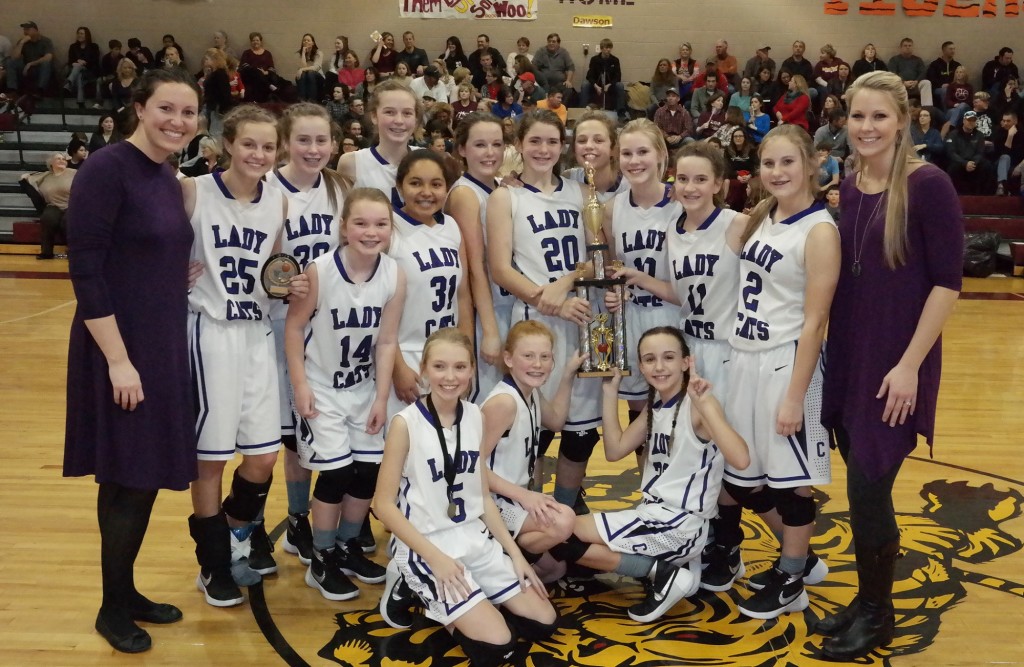 “It was great!,” exclaimed Clear Creek coach Ashley Bryant when asked about winning the title. “It was phenomenal. Nothing is better than free basketball. It gave us life to go into overtime, because we were struggling, as a whole. We couldn’t get our offense going tonight. But it was nice to have some sixth-graders step up and do some stuff for us. The girls have grown so much. We have improved and that ending tonight … that was them playing as a team. I could not be more proud of them and I couldn’t have asked for a better ending to the season. The future looks bright.” 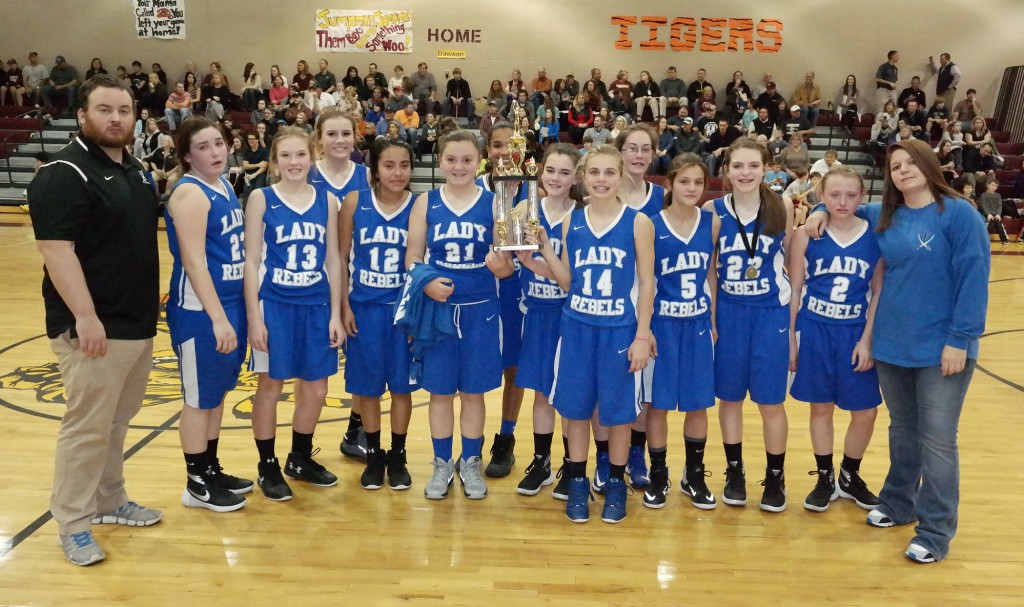 The seventh-grade Lady Rebels finish the year with an 11-3 record, while the Lady Cats completed the campaign with a 12-2 mark.

After the Clear Creek/Fannin game, the Lady Cats recognized Hope Colwell (left) as their All-Tournament selection, Emma Callihan (center) as their Tournament MVP and Kimberly Holt (right) as the Academic Award recipient. (Photo by: Kevin Hensley)

After the Clear Creek/Fannin game, the Lady Rebels recognized Kennedy Harper (left) as their Academic Award recipient and Abby Ledford (right) as their All-Tournament selection. (Photo by: Kevin Hensley) 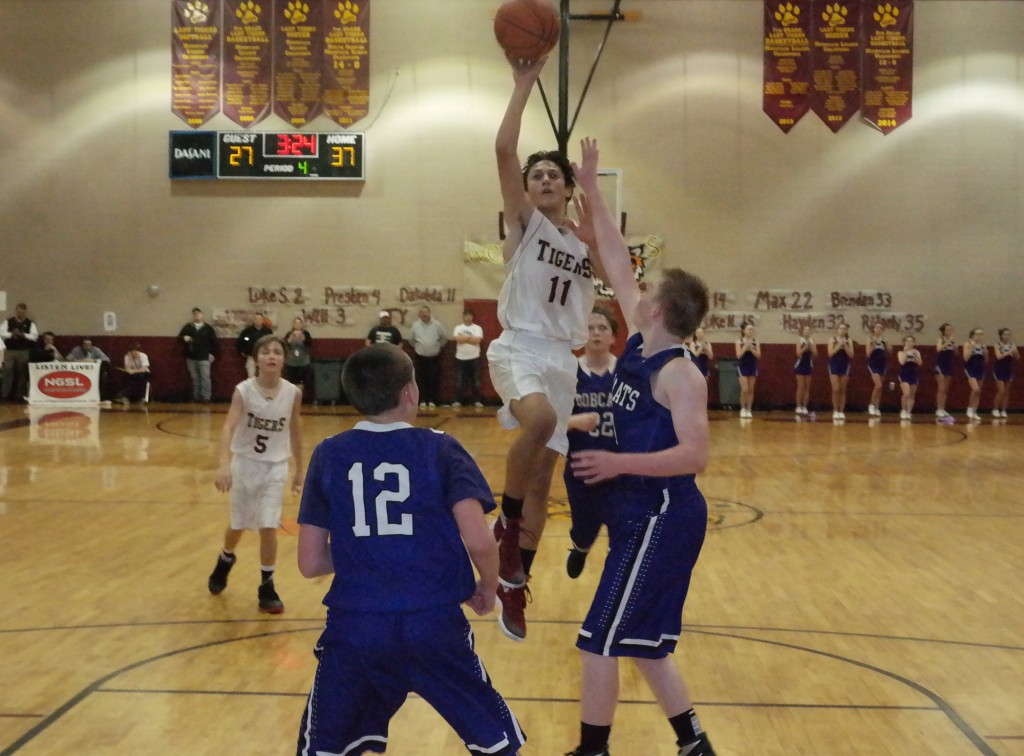 In the seventh-grade boys title game, the Tigers built early momentum to stay one pounce ahead of the Bobcats throughout the first half. A strong offensive and defensive first quarter from Dakota Sonnidson (nine points, three rebounds, one steal) helped give Dawson an 11-5 lead by the end of the period.

A combined nine second-quarter boards for the Bobcats gave Clear Creek the chance to cut the lead down to 17-14 by halftime. Dawson responded by outscoring CCMS 18-8 in the third quarter, opening up a 35-22 lead in the process. With reserves playing the closing minutes of the title game, the Tigers went on to claim the 45-31 victory and the seventh-grade boys championship. 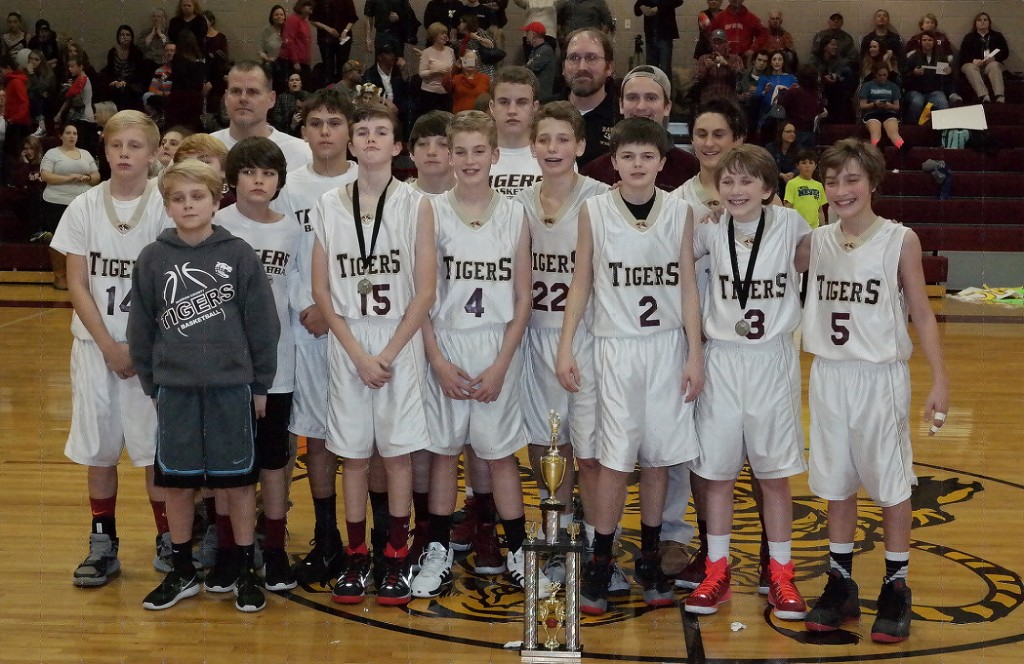 “It’s been an awesome season for us,” said Dawson head coach Steven Moates. “We’ve worked really hard and we’ve got a lot of kids with a great skill set and they work hard in practice. I told them in the locker room, ‘This is what hard work earns.’ They’ve done a great job for us. It means a lot, but it means more to the kids and the school. It’s just a great way to end the season.” 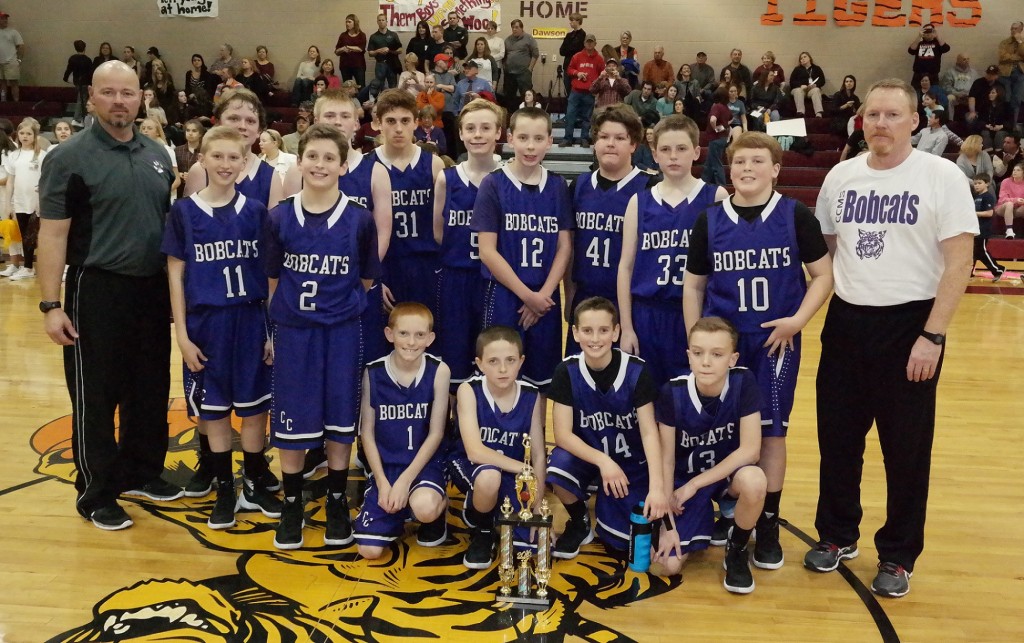 “Nobody thought we were going to make it (to the title game). We’ve come a long way,” said Clear Creek coach Tim Davis. “A bunch of guys that got together at the first of the year, learned the system, had four one-point games and got a ton of experience. This is just a win all-around. I couldn’t be happier. The kids play hard, they learn and they’re respectful. They’re good kids and that’s a testament to them.”

The seventh-grade Tigers finish the year with an unblemished 10-0 record, while the Bobcats wrap up the season at 8-7. 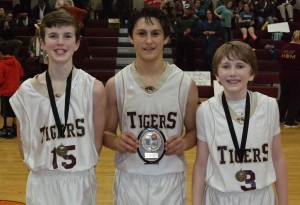 After the Dawson/Clear Creek game, the Tigers recognized Luke Hamby (left) as their Academic Award recipient, Dakota Sonnidson (center) as their Tournament MVP and Will Howard (right) as their All-Tournament selection. (Photo by: Kevin Hensley) 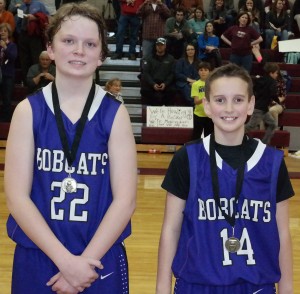 After the Dawson/Clear Creek game, the Bobcats recognized Braden Jenkins (left) as their All-Tournament selection and Colton Nunn (right) as their Academic Award recipient. (Photo by: Kevin Hensley)

Becca Ledford: One rebound, one steal. 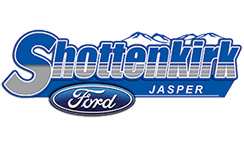