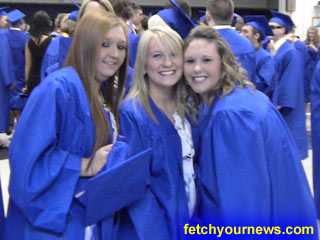 Fannin County High School hosted its 34th annual graduation commencement for the class of 2011. The graduate processional was accompanied by the classic “Pomp and Circumstance.” Graduates pose before the ceremony
(Photo by LT Melton) Daniels spoke about leadership, hard work and ingenuity. He quoted his favorite author Ayn Rand’s quote, “The question isn’t who is going to let me, but who is going to stop me.” The overall message being to the class of 2011 being, do not ask to be successful. Woford’s commencement address centered on the experiences she shared with her classmates, such s having two principals throughout their matriculation, and having a new stadium built. She advised her fellow graduates to “keep your friends close and your families closer.” The inspirational song was “Carry On by Hank Fellows. Principal Erik W. Cioffi presented the class and school board member, Bobby Bearden accepted the class. The diplomas were distributed and the tassel ceremony was led by Wolford and Daniels.