McCaysville, Ga. – Darrell Allen Tritt, age 59, of McCaysville is facing charges of simple battery, reckless conduct causing harm or endangering bodily safety of another, aggravated assault with a gun and discharging a firearm while under the influence.

McCaysville Police responded to a 911 dispatch on the evening of Saturday, Feb. 8, 2020.

Officer Peter Kusek along with Officer Philip Newberry were working the nightshift when a call came in around 8:29 p.m. of a domestic in progress with shots fired. 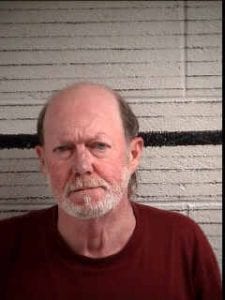 Kusek was first to arrive at the scene and was met by David Hatcher in the front yard of the residence. Hatcher had been the one to call 911.

According to Hatcher, he had received a text message from his mother, Jacqueline Tritt, stating that his stepfather, Darrell Tritt, had hit her. He had come to their residence out of concern for his mother’s safety.

Hatcher admitted that he had broke the lock on the glass storm door trying to gain entry and had kicked the interior wooden door twice. It was then that Darrell Tritt had called out to Hatcher that he was a “stupid mother<explicit>” and demanded that he leave.

Shortly after Tritt demanding Hatcher leave, a shot came through the wooden door, narrowly missing Hatcher and shattering the glass storm door that Hatcher was holding open with his body. It was at this time that the 911 call was made and Hatcher stated in that call that “mom was trying to get the gun”.

During this discussion between Hatcher and Officer Kusek, suspect Darrell Tritt exited the house with empty hands in the air and yelled to the officer that he did not have a weapon.

Though visibly intoxicated, according to Kusek, Tritt was capable of understanding the situation and communicating, and allowed the officer to handcuff and search his person without incident.

Kusek described Tritt as “unsteady on his feet” with “glassy and bloodshot” eyes, and had an “odor of alcoholic beverage on his breath”.

Tritt told a different version of events claiming that he had never hit his wife Jacqueline. Tritt admitted to firing a gun but claimed it was self-defence. Tritt told Kusek that he was physically diabled and that Hatcher had come to the residence “to beat his ass”.

Hatcher was reportedly calm while his stepfather told this version of events and did not offer to interfere or attempt to argue with Tritt.

When Jacqueline was questioned about her husband’s actions that evening, she first stated that she had no idea how the glass door had been broken, and that she had been asleep during the entire event. When Kusek told Jacqueline that he heard it was from a gunshot, she replied, “I guess, I don’t know.”

Hatcher told officers a different version of his mother’s actions, claiming that after the shot had been fired, Jacqueline had exited the house and asked him not to call the police.

Eventually, Jacqueline broke down and began crying, making statements that her husband is never like this and she didn’t know what had happened.

With permission officers searched the residence and located the weapon that had been used. Officers also verified the initial text message sent from Jacqueline to her son.

Darrell Tritt was then taken into custody.

Darrell Tritt waived his rights and spoke with officers before being charged and transferred to the Fannin County Detention Center.